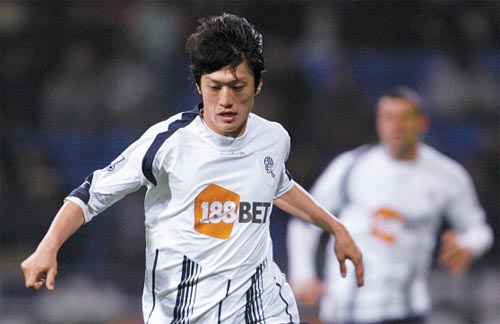 Lee Chung-yong controls the ball during a match against West Ham at Reebook Stadium, Bolton, England, on Dec. 15. [AP]

Lee Chung-yong of the Bolton Wanderers scored the opening goal in a league match against West Ham United at Reebok Stadium in Bolton, England, yesterday. The goal, Lee’s third of the season, helped the club to a 3-1 win.

In the 64th minute of the match, the 21-year-old midfielder made his way up the left side of the pitch with two West Ham defenders in pursuit. He dribbled toward the center area of the opponent’s zone and connected on a give-and-go with Ivan Klasnic and followed up with a right-footed shot that sailed over the advancing West Ham goalkeeper Robert Green.

While Lee kickstarted Bolton’s offense, West Ham’s Alessandro Diamanti responded with a goal of his own in the 69th minute. The turning point came when West Ham’s goalkeeper Green made a fatal error in the 77th minute, losing control of the ball long enough for Klasnic to score. Then Gary Cahill capped off the game with another goal with two minutes remaining in the game.

Sky Sports gave Lee a rating of eight for his effort, which was the highest rating in the game, and the fans gave him an average score of 9.2.

Since joining Bolton from FC Seoul in July, the energetic midfielder has three goals, which has him tied for third on the team with Matt Taylor and Tamir Cohen. The leading scorer on the squad is Ivan Klasnic with five. Lee is also averaging 6.59 points in Sky Sports Players Rating, which is also the third-highest among Bolton playeres. Each player is given a score out of 10 after each game.

While Bolton had been struggling at the bottom of the league standings for much of the season, manager Gary Megson said he has been pleased with Lee’s production and efforts this season.

“Chung-yong has done really well. The lad has got talent going forward. He loves to attack all the time,” Megson stated in an interview with The Bolton News recently.

With the win, Bolton moved out of the bottom three relegation zone and moved up to 17th place out of 20 teams. Bolton holds a record of four wins, four draws and eight losses. Next up for Bolton is an away match against Wigan Athletic at DW Stadium on Dec. 21.