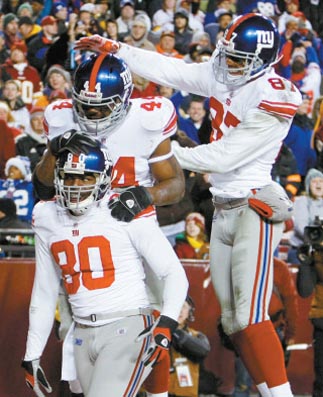 New York Giants Derek Hagan (80) is congratulated by teammates Ahmad Bradshaw (44) and Domenik Hixon (87) after scoring a touchdown in the second half of action against the Washington Redskins in Landover, Maryland, on Dec. 21. [REUTERS]

New York improved to 8-6, one game behind Dallas and Green Bay for the last National Conference playoff spot with two games remaining.

The Giants started 5-0 then stumbled with defensive woes before bouncing back in recent weeks.

The Giants surged ahead 24-0 at half-time on their way to their biggest one-game scoring performance in a road game in 55 years and Washington never seriously challenged, the Redskins sliding to 4-10.

Bradshaw scored on a three-yard run 9:13 into the game and added a four-yard touchdown run 39 seconds into the second quarter to give New York a 14-0 lead.

Lawrence Tynes kicked a 38-yard field goal and Manning connected with Steve Smith on a six-yard touchdown pass 4:36 before the end of the second quarter to boost New York’s margin to 24-0.

The Redskins managed only five yards of total offense in the first 29 minutes before moving within field goal range, only to fake it in favor of a pass attempt that was intercepted to mercifully end the half for the hosts. AFP