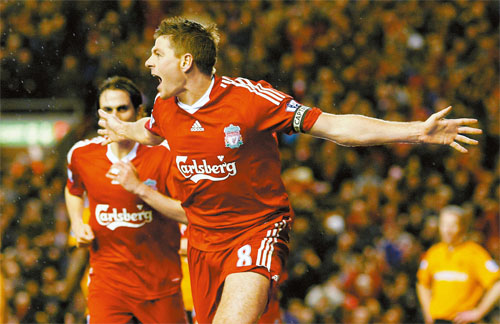 LIVERPOOL, England - Steven Gerrard and Yossi Benayoun scored second-half goals as Liverpool toiled to a 2-0 win over the 10-man Wolves at Anfield on Saturday.

The Reds were frustrated by Mick McCarthy’s team until referee Andre Marriner sent Stephen Ward off just after the interval. Gerrard soon scored his first goal in almost two months - his fifth of the campaign - to put Liverpool ahead. And Benayoun was also on the scoresheet to give the scoreline a decisive feel that Liverpool, who had won only four of their previous 17 games, did not deserve on their performance in the first hour.

Whether this is the start of a revival will be put to the test when they travel to Aston Villa on Tuesday.

With Alberto Aquilani making his first Premier League start five months after joining in the team, Liverpool totally dominated the opening quarter of the match.

Fabio Aurelio’s floated free kick was held by Wolves’ goalkeeper Marcus Hahnemann with just a minute on the clock. And Aquilani showed he will not be intimidated by the physical nature of the Premier League by flying into a challenge with Karl Henry, setting up the chance for Gerrard’s bobbling shot to force a save from Hahnemann. As Liverpool continued to control the game, Emiliano Insua sent Fernando Torres wide on the left but the Spaniard cut in to hit a powerful drive at the near post that was pushed away by Hahnemann.

The Wolves had barely threatened but they more than made up for that as the half wore on. Serbian midfielder Nenad Milijas only managed a wild effort that flew into the stand. But after Matthew Jarvis tore past Glen Johnson down the Wolves’ left flank, he sent over a cross that saw Sylvan Ebanks-Blake force a low save from Pepe Reina with a shot on the turn.

Milijas hit a free kick that was just pushed over by Reina as the visitors continued to battle.

The resulting corner from Milijas picked out Ebanks-Blake at the front post but the unmarked striker failed to hit the target from five yards. There was more concern for the hosts when Kevin Doyle lobbed over his head and Milijas dragged another shot wide from just outside the area.

And as Liverpool attempted a response at the other end, Gerrard worked some space and pulled back for Torres, who sliced wide. The Anfield crowd was growing more and more frustrated and Lucas drove over from 25 yards.

Liverpool’s irritation continued after the break, with Aurelio’s free kick from the right flying over the Reds’ attackers and straight to Hahnemann.

Five minutes into the second period, a calm passing move saw Insua feed Gerrard, whose dipping shot was heading for the corner before it was turned wide by Hahnemann.

Liverpool were handed a numerical advantage when Ward was sent off - despite referee Marriner initially showing a card to the wrong player. Ward had already been booked for tugging at Yossi Benayoun moments before he tripped Lucas. Marriner mistakenly showed Christophe Berra the yellow card before consulting with his linesman and sending Ward off. That proved to be the turning point and, just after the hour, Liverpool finally managed to take the lead.

Argentinian left-back Insua burst clear down the left and floated a crossover that Gerrard reached first to head into the corner of Hahnemann’s net.

With 20 minutes remaining, Aurelio’s cross from the left beat everyone in the area and Benayoun’s shot deflected off George Elokobi to double Liverpool’s lead.

Liverpool were able to play out the rest of the game in comfort, but they will have to improve considerably on this performance when they travel to Villa. AFP