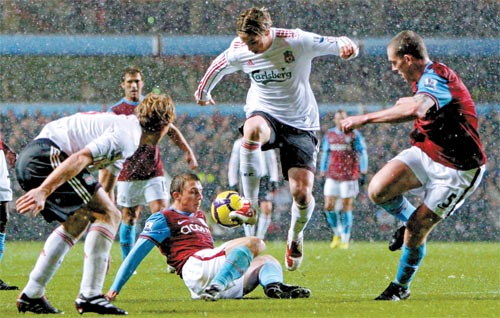 BIRMINGHAM, England - Rafael Benitez may spare striker Fernando Torres FA Cup duty against Reading on Saturday so as to keep him fit for Liverpool’s bid to get back into the top four of the Premier League. Torres became the quickest Liverpool player to 50 league goals with a stoppage-time winner in the Merseysiders’ 1-0 victory away to Aston Villa here on Tuesday, a result that left the Reds within four points of a top four finish that will secure a place in next season’s Champions League.

But the Spain striker now has a slight ankle injury to go with the groin problem he has been carrying for the majority of the season. Benitez will assess Torres over the next few days, but is determined to keep his compatriot as fit as possible for the remainder of the Premier League season, starting with the home fixture against Tottenham Hotspur on Jan. 10 - a game which could see Liverpool claw back further lost ground on their rivals in the race for a Champions League place.

“He has a problem with his ankle as well as his groin,” Benitez told reporters here at Villa Park. “We will have to assess things and see what happens. We will leave it with him, but we need to keep him fit for the remainder of the season. That is the important thing.”

Torres’s injury is likely to clear up in time for him to face the Spurs, but there could be more serious concerns for Liverpool’s Glen Johnson. The England defender left Villa Park on crutches with a knee problem and he will be monitored in the next 24 hours, with Benitez feeling he may need a scan to assess the extent of his injury.

Torres’s winner against Villa saw him break the Liverpool 50 league goal record of Roger Hunt, the Spaniard getting there in 72 matches - six fewer than his illustrious 1966 England World Cup-winning predecessor. It is a measure of Torres’s standing at Liverpool that few now question Benitez’s decision to spend 27 million pounds ($43 million) on bringing the forward to Anfield from Atletico Madrid in 2007. Benitez knows just how crucial Torres and club captain Steven Gerrard, the Reds’ inspirational England midfielder, are to Liverpool.

“It is important for us to keep Torres and Gerrard fit. If they stay fit and can play in most of the games remaining for us then we have a very good chance,” said Benitez, who has been surprised at the furor caused by his decision to “guarantee” a top four finish this season.

“A manager in my situation, at a club like Liverpool, when he gets asked a question like that he has to give the guarantee. I am surprised that people are all talking about it,” Benitez added. “What else am I going to say? What other answer can I give? I have to be the first one to believe and I have to make the players believe.

“People say I am putting pressure on them. What else am I supposed to do? I am the manager.”

Villa’s first home defeat since the opening day of the season against Wigan made it two significant defeats in the space of three days against their rivals for a top four place following a 3-0 loss away to Arsenal.

If morale was dented by Sunday’s chastening experience in north London, the cruel nature of this defeat will only deepen the pain. But Villa manager Martin O’Neill insisted his players could cope with this setback.

“People will reflect on the two results and say that we have had a bad Christmas, but it is always hard when you have two games in 48 hours.

“Liverpool had the extra day to prepare for this, but I don’t want to sound like I am moaning.

“It is just a fact. At this stage of the season those extra 24 hours may have made all the difference, but we will never know. We will pick ourselves up and go again. I am certain of that.”