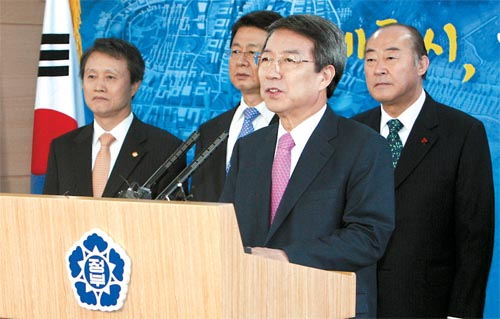 Prime Minister Chung Un-chan yesterday officially unveiled the revised development plans for Sejong City in South Chungcheong, including building plans by business giants such as Samsung, Hanwha, Lotte and Woongjin together with Kaist and Korea University.

The government is set to launch a related legislative process to make it all happen, but strong resistance from Chungcheong residents and opposition political parties indicate that a bumpy road lies ahead.

In separate press conferences, leaders of governments in both South Chungcheong and North Chungcheong insisted that “proceeding with the original plan is the sole alternative.”

As he has reiterated since controversies over redrawing plans for developing the city emerged in tandem with his appointment in late September last year, Prime Minister Chung said the original plan by the former Roh Moo-hyun administration to relocate nine ministries and other government agencies will be entirely nullified.

Lee Wan-koo, former governor of South Chungcheong, said, “I can see that the government strived to provide self-sufficient functions with Chungcheong. But the [revised] plans are largely insufficient for tackling issues such as balanced national development, overpopulation of the Seoul metropolitan area and discrimination against other cities.”

Residents of Yeongi County, where the new Sejong City is being built, also said the new government plans are “far from being new, except for the fact that the original administrative relocation plan was lifted.”

But Seoul and some other regions, with no interest in losing facilities themselves, welcomed the government decision. Nam Sang-woo, mayor of Cheongju, a city in North Chungcheong, said, “It is important to think about what to do for balanced regional development.”

Some party members shaved their heads at the National Assembly building in Yeouido, western Seoul, in a collective protest. 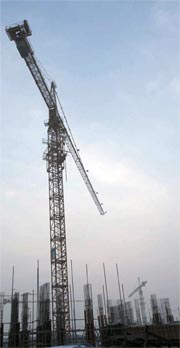 Construction yesterday continued on the first buildings at the planned site for Sejong City. [YONHAP]

“Sejong City has been transformed into one of those industrial cities and public opinion has been split. Chungcheong has degenerated into a way to maintain the vested interests of the Seoul metropolitan area centralists ... Who will listen to our anger and pleas?” said the Liberty Forward Party in a statement. The party is based in Chungcheong.

Park Geun-hye, who leads a faction within the GNP that is against the idea of scrapping the original plan, made no official comment. She reiterated her position in her last public appearance last Thursday.

Prime Minister Chung said the government intends to advance the date of completion for the city development project from the original 2030 to 2020. By then, the city will have a population of 500,000 and create a total of 246,000 new jobs. Fifteen percent of its energy will be from renewable sources, the government said.

“If any political subplot was involved in the past promise, wouldn’t it be the courageous determination of a leader who esteems the country to adjust it even if it’s late? Construction of Sejong City is an immensely crucial national affair,” said Chung in a press conference.

The city, four times the size of Bundang, a new town near Seoul, will be built into an “education and science belt,” according to Kwon Tae-shin, chief of staff at the Prime Minister’s Office. “The goal of the original plan was building a past-centered administrative city, while we are now pursuing a future-oriented cutting-edge economic city,” he said.

Korea University and Kaist, or Korea Advanced Institute of Science and Technology, will each be given one square kilometer of land and operate research-focused undergraduate and graduate courses. Kaist has a main campus in Daejeon, a metropolitan city next to Sejong.

The government will sign a memorandum of understanding with those companies and universities by the end of this week and aims to pass related bills at the April National Assembly session. 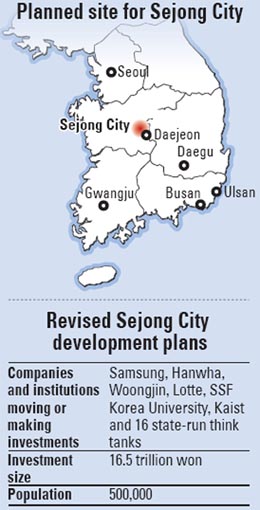 By 2015, 3.5 trillion won will be spent to build a Sejong international research institute that will accommodate a heavy ion collider, smaller think tanks and a graduate school.

Friction surrounding Sejong City dates back to 2002 when then-president-elect Roh Moo-hyun pledged to relocate the country’s capital to the city in South Chungcheong.

Following heated debate over the plan’s constitutionality, the original promise was revised to moving only administrative units in 2005 as a compromise between the then-ruling Democratic Party and main opposition Grand National Party.

At the time, then-GNP leader Park Geun-hye led the negotiations while Seoul Mayor Lee Myung-bak opposed the plan. The name Sejong was designated for 2.97 square kilometers of land in Yeongi County and the cuty if Gongju in South Chungcheong in December 2006 and a groundbreaking ceremony was held in July 2007.

Home for the holidays