Protestors removed from planned base site

Protestors removed from planned base site 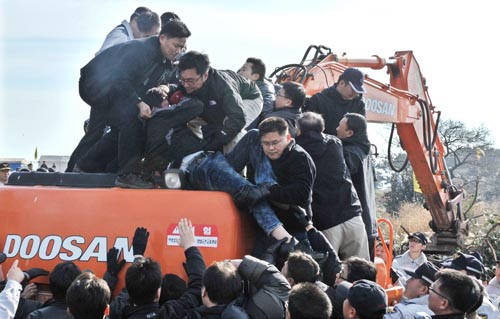 Police officers drag down villagers who occupied an excavator yesterday to block construction workers from resuming work on a groundbreaking ceremony for a new naval base at Gangjeong Port, Seogwipo, on Jeju Island. The groundbreaking is slated to be held Feb. 5. [NEWSIS]


People protesting against the building of a naval base on Jeju Island were taken and questioned by police on charges of staging a sit-in and setting up tents in an area that will see a groundbreaking ceremony next month, Seogwipo police said yesterday.

Police said a group of 40 villagers who are against the base at Gangjeong Port in the city of Seogwipo occupied an excavator in the area to block construction workers from their jobs. The Seogwipo police mobilized 400 officers to drag the villagers out of the site around 6 a.m. yesterday, after the Korean Navy requested help in preparing for the groundbreaking ceremony slated for Feb. 5.

Hours later, police took another 10 villagers including Ko Yu-gi, a senior executive of a civic alliance that opposes the naval base in the area, over their fierce protests. They were charged with interfering with official work.

An official who deals closely with the naval base construction said the villagers began their sit-in illegally on Jan. 4 and refused to leave the site despite the Korean Navy’s request. “We had no other option but to ask the police to drag protestors,” the official said.

The alliance against the naval base criticized the police and the Korean Navy, and said they abused public power. “We will report this incident to the International Union for Conservation of Nature, which will hold its World Conservation Congress on Jeju Island in 2012,” an alliance member said in a press conference.

Once completed, the naval base would accommodate more than 20 naval fleets and two15-ton cruise vessels. There will be other living facilities to accommodate 7,500 naval servicemen and their families.