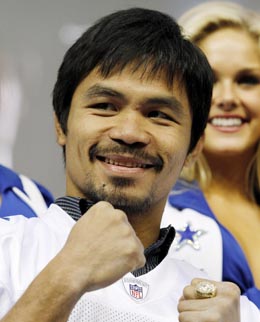 DALLAS, Texas - Filipino superstar Manny Pacquiao began promoting his March 13 welterweight fight against Ghana’s Joshua Clottey on Tuesday, looking ahead after failed talks with Floyd Mayweather. Pacquiao, 50-3 with two drawn and 38 knockouts, will defend his World Boxing Organization title against Clottey, 35-3 with 21 knockouts, on the same date he was expected to face unbeaten U.S. star Mayweather before negotiations broke off.

Pacquiao’s camp rejected Mayweather’s unprecedented request for random blood testing, denying boxing fans a long-awaited showdown between the sport’s pound-for-pound kings that could have been a $40 million (45.3 billion won) payday for each. But Clottey served notice that he intends to be more than just a fill-in fighter destined to fall to the Philippines powerhouse.

“This is going to be a hell of a fight,” Clottey said. “I love Manny Pacquiao. If you throw [punches] at him, he will throw back at you. I know what I’m going to face.”

The matchup will headline the first fight card at the $1.2 billion (1.3 trillion won) Cowboys Stadium, home of the famed American football squad.

“It’s a building for great competitions. It bodes well for us to get Manny Pacquiao into the ring,” said Cowboys owner Jerry Jones, whose guarantee of $25 million (28.3 billion won) was not enough to bring a Pacquiao-Mayweather fight together.

Freddie Roach, Pacquiao’s trainer, made it clear after the news conference that hard feelings remain over the failure to make that match happen, despite a compromise of no blood test within two weeks of the fight.

Pacquiao “is disappointed the fight is not here,” Roach told ESPN. “Life goes on without Mayweather. ... We did our best to appease him but he wouldn’t go along with it.”