Two goals up, then two goals down

Two goals up, then two goals down 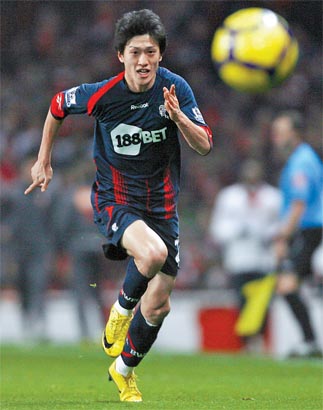 The Bolton Wanderers’ Korean midfielder Lee Chung-yong runs during a match against Arsenal in London on Wednesday. [AFP]

In a case of what could have been, the Bolton Wanderers yesterday looked well on their way to avenging a 2-0 loss at home against Arsenal three days earlier. But the team failed to hold onto a two-goal lead and went down 4-2 at Emirates Stadium in London.

Coming off a match in which he was named the Player of the Game, Bolton’s Lee Chung-yong contributed an assist in the game.

Bolton did not take long to make the opening goal, as Gary Cahill scored off a nifty pass from Kevin Davies seven minutes into the match. In the 28th minute, Lee was brought down in the box by Neves Denilson and Matt Taylor scored off the resulting penalty kick to put the Wanderers ahead by two goals in the first half.

Lee was credited with an assist on Taylor’s penalty-kick goal. The assist was his third in league matches and fourth when including the Carling Cup.

Bolton was on track to win its first game under new manager Owen Coyle, but an offensive onslaught from the Gunners proved too much for the team. Arsenal started its comeback in the 43rd minute, when Tomas Rosicky scored to make the match 2-1.

In the 52nd minute, Arsenal tied the match as a result of a controversial non-call from referee Alan Wiley. William Gallas made a rough tackle on Davies but Wiley let play resume, leading to Cesc Fabregas’ equalizing goal. The Gunners took the lead when Thomas Vermaelen followed up with the go-ahead goal in the 65th minute.

With time running out, Coyle attempted to spark the offense in the 81st minute by substituting Lee for Ivan Klasnic. With Arsenal needing to win by two goals to take the top spot in the league standings, their fourth goal of the match came from Andrey Arshavin in the 85th minute.

“I think we were shaky after the controversial goal in the early goings of the second half,” said Lee in a post-match interview with the JoongAng Ilbo.

“Luck wasn’t on our side. We did not control the ball as well as we did in the first half. I wish I could have had more touches on offense.”

The two-goal differential moved Arsenal ahead of Chelsea to take the top spot in the league standings with a record of 15 wins, three draws and four losses. Bolton remains in 19th place in the 20-team league, with four wins, six draws and 10 losses. Since starting the new year with a convincing win over Lincoln City in the FA Cup, Bolton has now lost two consecutive league matches, both to Arsenal.

“I will try my very best until the end of the season. We are starting to play a lot better and since the arrival of the new manager, the players have been determined to turn things around. It’s only a matter of time before we move out of the relegation zone,” said Lee.

Bolton continues to play a tight schedule as it hosts Sheffield United, a second-tier club, in an FA Cup matchup on Sunday. In its following match, Bolton hosts Burnley on Jan. 27.

“I was tired today from the game three days earlier. I’ll have to watch my conditioning for the FA Cup match this weekend,” Lee said.