Park back in the lineup as Hull falls to Manchester United

Park back in the lineup as Hull falls to Manchester United 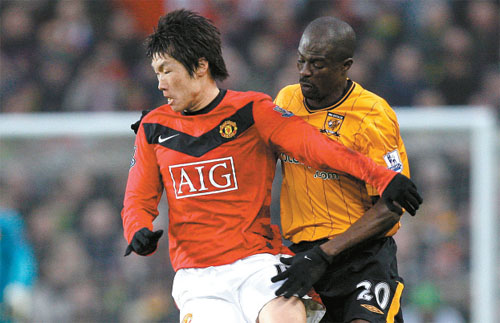 The man of the match was Manchester United forward Wayne Rooney, who scored all four goals.

The win gave the Reds 50 points, and the defending English Premier League champions moved to the top of the league standings ahead of Chelsea and Arsenal for the first time in more than three months.

Park returned to the lineup for the first time in two matches, having sat out against Burnley on Jan. 17 and Manchester City last Wednesday. Although he failed to register any goals or assists in the game, he flashed his usual active style of play and created opportunities for his teammates throughout the match.

“My prolonged absence from the starting lineup is due to early season injuries.

“I have since recovered from my injuries and have been receiving regular playing time and hence I’m not worried,” Park said in a post-match interview.

Starting at the left winger position, Park helped create the opening goal merely seven minutes into the match. He advanced up the left side of the field before connecting on a pass to Paul Scholes, who managed to release a long-range shot which was blocked by Hull City goalkeeper Boaz Myhill. Rooney managed to score on the rebound.

In the 13th minute, Park connected on a header from Darren Fletcher near the goal which barely missed the net. Park threatened the goal again in the 30th minute when he managed to find his way toward the center area just outside the penalty box before being brought down by a Hull defender. Rooney took the free kick and drilled a shot which went just wide of the net.

In the 66th minute, Park had a golden opportunity to put his team up by two goals when a cross from Nani found the unmarked Park in front of the net.

However, the opportunity went to waste as Park mistimed the cross and fanned on the pass. Park has failed to score a goal this season.

“I always want to score a goal. However, I try not to let such thoughts get in the way of my performance in games,” explained Park.

With the Reds nursing a narrow one-goal lead, Rooney took charge and scored in the 37th, 42nd and in added time to carry his team to a 4-0 victory.

Meanwhile, Lee Chung-yong of Bolton continued his impressive play in the FA Cup match against Sheffield United at Reebok Stadium yesterday. With Bolton up by a goal, Lee assisted on Johan Elmander’s goal in the 84th minute to lead his team to a 2-0 victory.