For Asada, it gets down to triple axels

For Asada, it gets down to triple axels 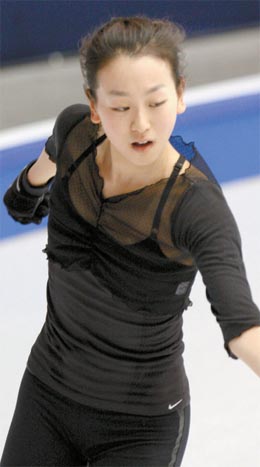 The Four Continents Figure Skating Championships will kick off tonight in Jeonju, North Jeolla, with the women’s short program starting at 5:30 p.m. The final International Skating Union event leading up to the Vancouver Winter Olympics next month will not feature Kim Yu-na, so all eyes will be on Kim’s rival, Mao Asada of Japan.

But Japanese compatriot and Grand Prix Final bronze medalist Akiko Suzuki is expected to challenge Asada for the top place on the podium. Other challengers include American Caroline Zhang, a World Junior silver medalist, and Myriane Samson of Canada. Korea’s top competitor is Kim Na-young. The 19-year-old skater had her personal best finish in fourth place (158.49 total points) at the Four Continents Figure Skating Championships in 2008.

The biggest question is whether Asada can successfully incorporate the triple axel jump into her routines. The difficult technique can earn high grades when executed properly. Asada has included one triple axel in her short program and two in her free program, but her triple axels have been far from perfect in the past. In the 2009-10 ISU season opener, Asada faltered on her first triple axel jump and went onto have a poor showing, while Kim went onto win the event in convincing fashion. The same was the case in Asada’s second ISU event of the season, as she failed to qualify for the ISU Grand Prix Final this season.

Despite her struggles with the triple axel, Asada is attempting to master the difficult jump because she must do so to compete against Kim at the Winter Olympics next month. Other than the triple axel loop, Kim has featured four variations of the triple axel jump in her routine this season and has earned more than 200 total points on two different occasions.

The 19-year-old Japanese skater will be without her coach, Tatiana Tarasova. According to the Sankei Sports, a Japanese sports daily, Tarasova has been suffering from high blood pressure since attending the European Championships in Estonia and will not be able to attend the Four Continents in Jeonju.

While Asada is facing a lot of pressure and little time remaining until the Olympics, she has to like the location of the event. She has traditionally fared well when competing in Korea. At the 2008 Four Continents Figure Skating Championships in Goyang, Gyeonggi, Asada took first place with Kim out with an injury. At the ISU Grand Prix Final in December of 2008, she defeated Kim in Goyang.

While a lot of attention is being paid to the women’s event due to Kim’s rivalry with Asada and the inclusion of the young Kim Na-young, the Four Continents Figure Skating Championships is a world-class event featuring 112 skaters and couples from 17 countries.

The men’s event will feature Korea’s Kim Min-seok, who is ranked 120th in the world, against top skaters including Americans Adam Rippon and Ryan Bradley, Denis Ten of Kazakhstan and Shawn Sawyer of Canada, among others, while Dan Zhang and Hao Zhang of China will be the top competitors in the pairs event and Kaitlyn Weaver and Andrew Poje of Canada are the top couple in the ice dance competition.

The event comes to a close on Saturday evening with the Gala Show starting at 5 p.m.