Officials cast nets to save the pollack

Officials cast nets to save the pollack 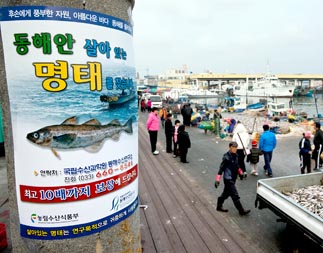 After the pollack disappeared from the East Sea, the National Fisheries Research and Development Center put up a notice offering 10 times the market price for a live pollack. By Cho Yong-chul

On Jan. 27, the Jungsung was treading the waters of the northern fishing grounds, where fishing is permitted only during the winter.

The ship had left Port Geojin at 5:30 that morning, and was waiting for permission from maritime police to travel farther north. At last, the ship received the go-ahead, and began its journey. Five fishermen, with adroit hand movements, released 135-meter-long (443-foot-long) fishnets - pollack fishnets, to be specific - into the water.

The area the Jungsung was in that day is 2.7 kilometers (1.7 miles) below the Northern Limit Line. Neither fishing vessels nor naval warships are allowed in this region. In fact, the North Korean patrol ships reportedly were on guard after detecting the Jungsung’s activities near the border. Tensions were especially high because the North had fired warning shots that day to the maritime border near Baengnyeong Island.

The Jungsung had planned to cast more nets, but stopped at the request of the coast guards, who were worried about strong waves and the dangers of upsetting the North.

Officials permitted the ship to enter such a dangerous region for a reason: to collect pollack eggs.

Experts attribute the sudden disappearance of the pollack to overfishing during the ’70s and ’80s.

In 1970, a ban on catching pollack less than 27 centimeters (10.6 inches) long was lifted, and fishermen even began to catch fries, or young fish, leading to an eventual population collapse. In 1996, the government reinstituted stricter regulations to undo the damage, but without success. These days, pollack vessels are nowhere to be found in the East Sea. In fact, before the most recent trip, the Jungsung hadn’t gone on a pollack hunt for four years.

In response to the crisis, the East Sea Fisheries Institute of the National Fisheries Research and Development Center launched a pollack restoration project. After studying Japan, which manages a small farming ground for the fish, the Institute searched for a live pollack to breed, beginning last November. The price offered? About 10 times the market rate.

In January, a live fish was brought into the laboratory, but it died inside two hours. Then information about four pollack in an aquarium came in, but those were all too young or too unhealthy to be used for reproduction.

Tired of waiting, the institute decided to send personnel to the sea to collect eggs from a freshly caught pollack. The net cast on Jan. 27 was hauled in on Feb. 1.

The process will be repeated four more times this month.

“Even getting just a few eggs will be a good starting point for us to restore the pollack population,” said Lee Dong-ha, a researcher from the institute.