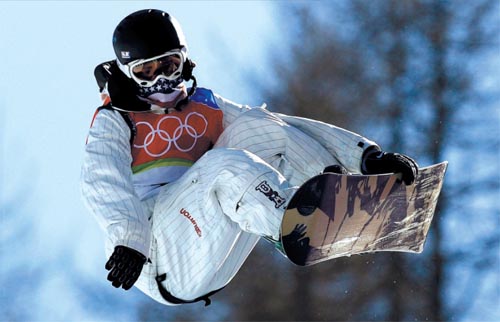 Shaun White competes during qualification in the men’s half pipe snowboarding race at Turin in 2006. [REUTERS]

WASHINGTON - Defending Olympic champion Shaun White has thrown down a challenge with his newest snowboarding trick and shown that he’s the man to beat on the half-pipe at the Vancouver Games.

“The Flying Tomato,” whose gold-medal run in Turin launched him to superstar status and brought him millions of dollars in endorsements, pulled off his latest trick on Jan. 22 in Park City. Then he admitted that the move frightened him.

“I have never admitted that. I was scared to do that trick. It’s intimidating,” White said after landing his “Double McTwist 12” - two flips with three and a half spins - on the halfpipe.

White, who said he was pushed to perfect the trick after losing out in a competition to compatriot Danny Davis, vowed to keep practicing ahead of the Feb. 17 competition in Vancouver.

“You know there’s always room for improvement. The judges are looking for big air and style tricks,” said White, who can train as much as he wants on his own half-pipe nestled in the countryside on Silverton Mountain in Colorado.

White is well aware of the dangers of tricks such as his latest one.

Teammate Kevin Pearce, considered one of the only people who could upset the reigning champion, suffered a serious head injury while trying a similar move. Neither Pearce nor Davis, who was injured in a quad bike accident, will be competing in the Olympics.