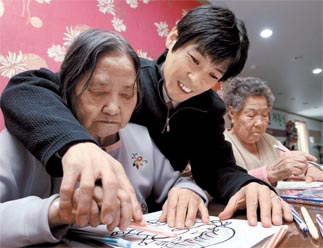 Lee Myung-eun, the founder of Goeunnim Nursing Home, helps a resident with a drawing on Jan. 28. Lee, who suffers from a rare disease that stiffens his joints, says he is much happier now than he was before he got sick because “I’m living a new life, not for me but for other people.” By Ahn Seong-sik

On a typical day, Lee Myung-eun, the founder of the Goeunnim Nursing Home in Incheon’s Namdong District, can be spotted helping residents or chatting with them between breaks in his schedule.

For most people, this kind of work is not demanding. But for Lee, every movement brings another sting of pain, as his spine is permanently bent at a 30 degree angle. His neck and shoulder joints have stiffened and he cannot move his arms freely.

“Ever since I got sick, the sky feels so far away,” Lee said. “I can’t even recall the last time I was able to look up at the sky.”

The first signs of his disease began to appear 22 years ago, when he was a sophomore in college. Feeling a stinging pain in his knee, he visited a neighborhood doctor, who diagnosed him with neuralgia. The pain eventually became so debilitating that Lee had to use crutches to get around.

“I went to many hospitals and therapeutic centers,” Lee said.

Still the pain did not subside.

It wasn’t until eight years later that Lee finally discovered the origin of his pain. The university hospital diagnosed him with a severe case of spondylitis, which, according to the doctor, “infects and gradually stiffens the joints.” The cause of this deadly disease has not yet been identified.

Then, what began in his knee soon spread to his face. The bones of Lee’s chin hardened, making it difficult for him to open his mouth. He was unable to talk normally, and he also began to lose his teeth. After graduating from college, he began working at a major corporation, but six years later he had to quit because of his health.

“I couldn’t chew so I changed my diet to soup,” Lee said. “Once, I almost swallowed a tooth that came out while I was eating.”

He saw his weight dramatically decrease from 70 kilograms to 50 kilograms (154 pounds to 110 pounds). He began a treatment regimen of injections and rehabilitation programs, which cost him over 1.5 million won ($1,300) per month. Later, he enrolled in a clinical trial for a new drug. But his spinal cord continued to bend, and he lived everyday in despair. He eventually shut himself inside his home, spending the time playing computer games.

Strangely, the disease stopped its progression in 2003. With his hope renewed, Lee decided to study social welfare.

“When I was healthy, I cared only about myself. But things changed when I got sick,” he said. “I wanted to help people in similar situations.”

In 2005, Lee enrolled at Myongji University, pursuing master’s and doctoral degrees. Last December, with about a year until his graduation, Lee decided to use his savings to open a nursing home. The facility now has three residents and four employees.

Currently single, Lee does not plan to get married any time soon. But he is content with his life.

“I’m much happier now than I was before I got sick,” he said. “I’m living a new life, not for me but for other people.”