Countdown to the Olympics

Countdown to the Olympics

Four years of sweat and resolve will be put to the test on the world’s biggest sports stage as the opening ceremonies of the Vancouver Winter Olympics, to be held from Feb. 13-29, Korean time, is merely days away. Forty-six South Korean athletes will compete in 12 events in everything from skating to the four-man bobsleigh.

Coming off its best finish at the 2006 Turin Winter Games, at which Korean athletes earned six golds, three silvers and two bronze medals, the country has set its sights even higher in Canada.

Korea will once again rely heavily on the short-track speed skating event for the majority of its gold medals, but in a departure from its Olympic history, this year the country has a female skating star: Kim Yu-na is favored to take the gold in the female figure skating event. If she does, it will be Korea's first gold in that discipline.

Park Sung-in, the head of the Korean Olympic delegation, repeated his goal of aiming for at least five gold medals and a top-10 finish.

“We are preparing to compete to the best of our abilities. We will see to it that we achieve the goal of placing in the top 10,” Park said to the media at a welcoming ceremony at the Athletes' Village in Vancouver, Canada yesterday.

At the last Olympics in Turin, Italy, South Korea tied for ninth in overall medal count and experts predict that a repeat performance is not far-fetched - and with luck, this year's results might even be better.

Korea first took part in the Games in 1948, when it was represented by a mere three athletes at the Winter Olympics in St. Moritz, Switzerland.

The country would miss out on the 1952 Oslo Games due to the Korean War (1950-53), but it returned to the international stage at the 1956 Winter Games in Cortina d’Ampezzo, Italy, with three athletes.

Nevertheless, it would take another 35 years for Korea to earn its first medal at the Winter Olympics.

Traditionally more successful in the summer Olympics, the country’s fortunes changed for the better at the 1992 Winter Games in Albertville, France, when short-track speed skating was included as an official event.

For a country that had been searching for a strategic sporting event on which to focus its limited resources, short-track speed skating became the answer to it's prayers. 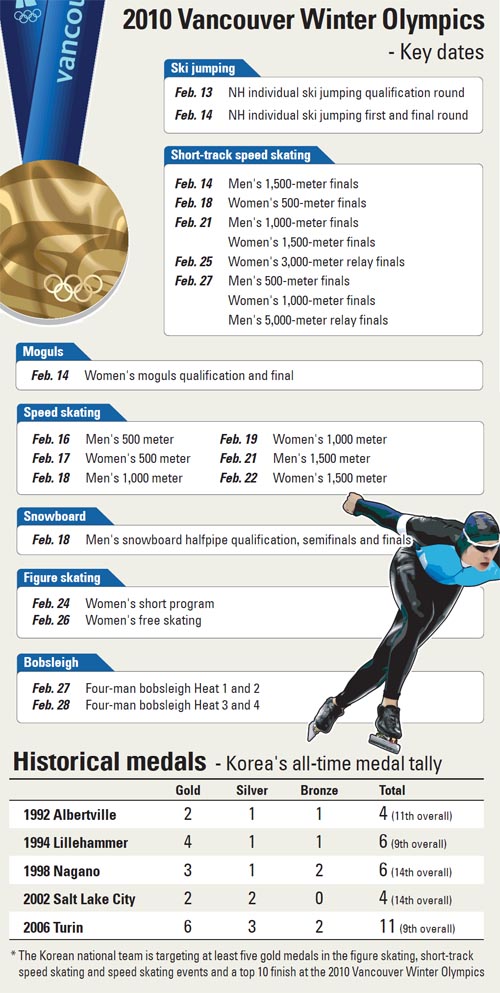 In the ensuing years, Korea has become a powerhouse in the short-track event, winning 10 medals at the Turin Winter Games in 2006.

Today, the South Korean short-track team is a force to beat, but the eyes of the nation will be on Kim Yu-na, whose strong performance in recent years has raised the profile of figure skating in a country where winter sports have always taken a back seat to other sports such as football.

How Korea performs in Vancouver may also aide the country’s third bid to host the Winter Olympics in 2018.