Kim Yu-na is the dominant force in figure skating

Kim Yu-na is the dominant force in figure skating 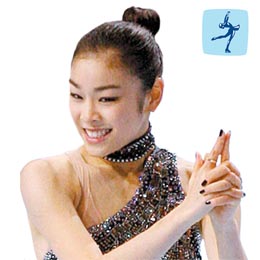 The most recognized Korean athlete at the Vancouver Winter Games is Kim Yu-na. Coming off a dominating 2009-10 International Skating Union season, Kim is currently ranked first in the ISU's world standings and is favored to win in Vancouver. Kim has had several record-setting performances this season and is at the peak of her career, placing her in good position to win Korea's first-ever medal in the figure skating event.

Kim has looked simply unbeatable in some ISU events ever since she dominated the 2009 World Championships at Los Angeles in March, setting world records in the short program and scoring 207.71 overall. In the 2009-10 season, Kim won all three ISU events she entered, beginning the season with another record-setting total of 210.03 and an all-time free skating record of 133.95 at the Trophee Eric Bompard in Paris. She went on to set another record in the short program with a score of 76.28 at the Skate America event in Lake Placid, N.Y., in December 2009.

The 19-year-old will once again look to nail her short program to the "James Bond Medley" and free-skating event to "Concerto in F" by George Gershwin.

This year's women's figure-skating competition looks to be one of the toughest in recent memory, with three former world champions vying for their first gold medal. Looking to challenge Kim are Mao Asada, ranked third in the world, and Miki Ando, ranked seventh.

While Asada boasts a personal best of 201.87 at the ISU World Team Trophy in April 2009, she has not had her finest season this year, looking shaky on her triple axel jumps. She's coming off the Four Continents Figure Skating Championships in Jeonju, North Jeolla, earlier this month, in which she managed to cap off the season with a personal best of 126.74 points in the free-skating program.

Ando is another formidable foe, the only woman in the history of the sport to land quadruple axel jumps. Ando's personal best scores came at the 2007 World Championships, which she finished with 195.09 total points.

Ranked sixth in the world, Akiko Suzuki is another world-class skater. Aside from the Japanese skaters, Carolina Kostner of Italy and Joannie Rochette of Canada will also provide an entertaining field in the women's figure-skating event.