Spending on education up despite bad economy

Spending on education up despite bad economy 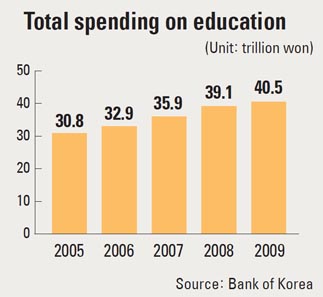 Even the worldwide recession last year did not discourage Koreans’ passion to spend money on schooling, despite government efforts to tamp down the country’s private education fever.

On the other hand, spending on alcoholic beverages and cigarettes fell for the first time.

Household spending on education for the first time exceeded 40 trillion won ($38.5 billion) between the fourth quarter of 2008 and third quarter of 2009, according to the Bank of Korea.

Despite the economic downturn that started in late 2008, educational spending was 3.5 percent higher than the previous year when it stood at 39.1 trillion won.

This means that each household spent on average 2.4 million won last year, up from 2.3 million won of 2008.

Spending on education accounted for 7.4 percent of total spending, the same as the previous year.

“Although the intention was good, the government’s effort in trying to ease the overheated spending on private education has been ineffective,” said Cindy Yu, a Daewoo Securities analyst. “Still, it is at this point too early to say the government policy has failed since it has only been two years and it will take time for consumers to accept it.”

Spending on alcoholic beverages and cigarettes during the same period retreated 0.5 percent to 13.9 trillion won. This is the first time that such spending has fallen since that data were first compiled in 1971. “The drop in alcoholic beverage and cigarette purchases is a result of the global economic downturn, which reduced the number of various gatherings including year-end parties,” said an official at the central bank.

Spending in other areas also fell as a result of the world economic downfall. Transportation spending was down 3.1 percent to 60.4 trillion won as more people stayed at home rather than traveling on the weekends.