After loss to China, Korea will face Japan

After loss to China, Korea will face Japan 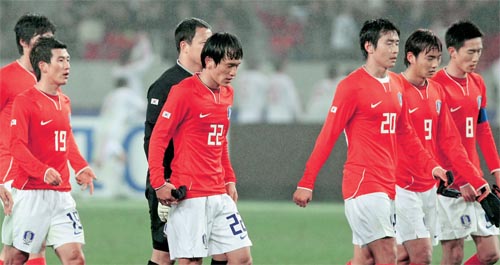 Korean players leave the pitch at Ajinomoto Stadium after losing to China 3-0 on Wednesday night in Tokyo. [YONHAP]

In a fitting end to what so far has been an interesting tourney, Korea will face off against archrival Japan on Lunar New Year’s day in the four-nation East Asian Football Championships on Sunday.

The 71st match between the neighboring nations will take place at 7:15 p.m. at the National Stadium in Tokyo. Korea is the historical favorite with 38 wins, 20 draws and 12 losses, scoring a total of 114 goals and allowing 64. But while Korea has the edge in terms of these statistics, Japan is currently ranked ahead of Korea in the International Football Association’s World Rankings, at 40th, while Korea is ranked 49th.

Japanese manager Takeshi Okada will be looking to lead his team to its first East Asian Football Championships title while Korean manager Huh Jung-moo and his men will be looking to redeem themselves from the 3-0 loss to China on Wednesday night.

Korea went into the match with a 27-game unbeaten streak against China, stretching over 31 years. Since Cha Bum-kun scored the lone goal of the match to lead Korea to a 1-0 win over China at the Bangkok Asian Games on Dec. 17, 1978, Korea had not lost a game to China.

“There are several reasons for the loss, but the end of the unbeaten streak was inevitable,” Huh said in a post-match interview.

In a move that eventually backfired, the manager had tweaked his lineup prior to the start of the match and started Lee Keun-ho and Lee Dong-gook up front and switched central defender Lee Jung-soo to left fullback while starting Kwak Tae-hwi in his place. The offense failed to produce many golden opportunities and the defense looked shaky throughout the game.

“We used some players who had not played a whole lot with each other and it led to an unfavorable result,” said Huh. “As a team, we played a horrible match.”

“Korea needs to work on improving their defense first and foremost,” said Gao after the game. “It’s true that we are behind in comparison to Korean and Japanese football. We need to work harder to close the gap.”

Huh is expected to tinker with his lineup again for the match against Japan. The shaky defense will undergo another face-lift to include Park Joo-ho (left fullback), Cho Yong-hyung and Kang Min-soo (central defenders) and Oh Beom-seok (right fullback). Lee Jung-soo, a regular in the central defense position, is expected to be scratched from the game after catching a knee in the groin area during the game against China.

Huh will have the luxury of working veterans Lee Young-pyo and Cha Du-ri into his defense when overseas players join the national team starting on March 3 in London against the Ivory Coast.

In addition, three starting midfielders, Park Ji-sung, Lee Chung-yong and Ki Sung-yeung, as well as forward Park Chu-young, should help to bolster the lineup for the final stretch of friendly matches leading up to the World Cup in June.