This reporter is no longer ‘waiting@’ the side of the story

This reporter is no longer ‘waiting@’ the side of the story 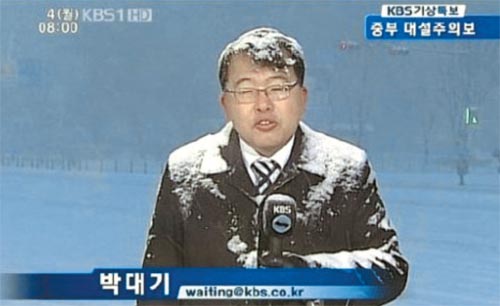 Park Dae-gi reporting in the midst of one of the worst snowstorms in the country on Jan. 4.

Unusual circumstances can bring fame to the most unexpected people.

Before one of the worst snowstorms in the history of Korea struck last month, 32-year-old KBS reporter Park Dae-gi wasn’t going much of anywhere professionally.

Most of the public didn’t even know he existed.

Just weeks later, Park is enjoying celebrity status and is considered one of the rising young reporters in broadcast journalism today.

Recently he’s been appearing not only on television news, but in entertainment programs.

Earlier this week Park appeared on the quiz show “1 vs 100.” Although he failed to win the 50 million won ($43,297) prize - he missed the name of a famous game character - many viewers enjoyed his guest spot. 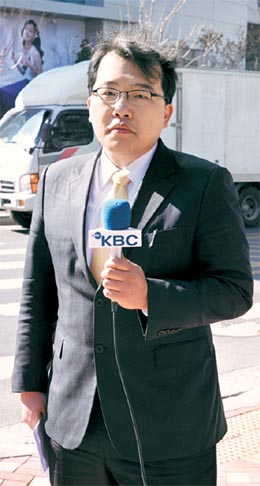 Park appearing as a reporter uncovering an illegal redevelopment project on the KBS television drama “Master of Study,” which aired last Monday. [NEWSIS]

Park confessed on the show that he is one of those people who lives their lives not knowing what being popular feels like.

He added that he has no girlfriend.

Park also appeared on the hit Korean television drama “Master of Study” on Monday, playing the role of a journalist who uncovers illegal acts surrounding a redevelopment deal.

Park grabbed the national spotlight on Jan. 4, when he reported live on the raging snowstorm for an early morning news show.

As the heavy snow interfered with reception between the reporter and the station’s anchor, Park stood outside while the flakes piled up on him, waiting patiently for his turn to report.

Adding irony to the humorous situation, Park’s first name means “on hold” or “wait” in Korean, and his e-mail - “waiting@kbs.co.kr” - appeared at the bottom of the screen as he did just that.

On the quiz show, Park said he purposely let the snow accumulate on him to let viewers see the severity of the storm.