The speed-skating team will be gunning for its first gold medal at the Vancouver Winter Games early this morning. Expected to compete in the men’s 500-meter speed-skating event at the Richmond Olympic Oval are five-time Olympian Lee Kyu-hyeok and 2006 Turin bronze medalist Lee Kang-seok. 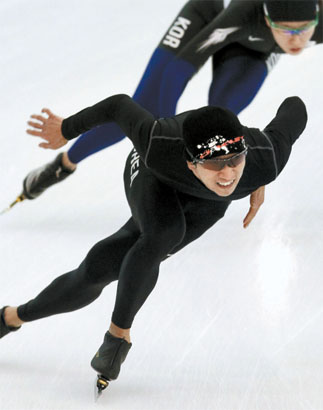 Lee Kyu-hyeok is the favorite to win, and he holds a slight edge over an impressive group of contenders that includes world-record holder Jeremy Wotherspoon of Canada, Shani Davis of the United States, Pekka Koskela of Finland and Yu Fengtong of China. Add to the list Joji Kato and Keiichiro Nagashima of Japan and the men’s 500 meter pool is stacked with skaters with the skills and experience to vie for the top finish in speed skating’s sprint event.

Lee will also have his hands full with his teammate Lee Kang-seok, who is also one of the favorites to win the gold, but Lee Ki-ho, Mo Tae-bum and Mun Joon are also promising skaters who can potentially reach the medal rounds.

“Of the younger skaters in the group, Mo Tae-bum has the potential to turn some heads in Vancouver. The condition of the skaters on the day of competition is vital,” said Baek Chul-gi, the director of the Korea Skating Union and head coach of the Uijeongbu City squad.

While Korea regularly produces gold medalists in the short-track speed-skating events, success in speed skating has been far and few between. Kim Yoon-man won a silver in the 1,000-meter at the 1992 Albertville Games and Lee Kang-seok won a bronze at the 2006 Turin Games before Lee Seung-hoon won a silver in the 5,000-meter event over the weekend.

The men’s 500-meter event could come down to a battle between the Lees. Lee Kyu-hyeok is currently competing in his fifth Olympics, and with one of the best times and his experience to his credit, he is the favorite to win. The 31-year-old veteran is approaching the Vancouver Games with the mind-set of competing in his final Olympics, with the logic being he is at his peak and this is likely his best shot at winning a gold medal. He placed first at the World Cup events in Salt Lake City and Calgary and currently is ranked second in World Cup standings behind teammate Lee Kang-seok. The 24-year-old is coming off a bronze medal finish at Turin and is ranked at the top of his peers.

Despite the strong prospects of reaching the medal rounds, the Korean skaters’ biggest obstacle is the Canadian world record holder, Wotherspoon, and his time of 34.03 seconds. The Saskatchewan native will be skating behind the strong support of his Canadian fans at the Richmond Olympic Oval.