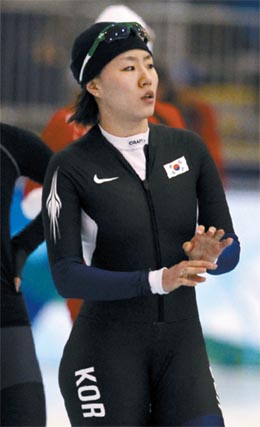 Lee Sang-hwa during a training session at the Richmond Olympic Oval last weekend. By Lim Hyun-dong

VANCOUVER - Lee Sang-hwa is preparing to achieve a feat that no other Korean female speed skater has ever accomplished: winning an Olympic speed skating medal.

The 21-year-old Lee is projected as one of the favorites in the 500-meter race today at Richmond Olympic Oval.

Lee is in peak physical condition coming off a win at the International Skating Union World Sprint Speed Skating Championships last month in Hokkaido, Japan. The title was a first for a Korean female skater.

And she’s ranked among the world’s top skaters in the 2009-10 World Cup series. Jenny Wolf of Germany, the 500-meter world record holder, has gone so far as to say that she will have to be at her best with Lee in the picture this year.

Most experts agree that Lee, Wolf and Wang Beixing of China will battle for the gold today. Wolf set the world record at the World Cup Salt Lake City in December by clocking in at 37 seconds flat in the 500-meter event.

With merely fractions of a second separating the three skaters, the difference on the day will be their physical condition.

“Lee has a better shot at earning a medal than us,” said her male teammate, veteran speed skater Lee Kyu-hyeok. “The female sprint event is between those three.”

Since Lee Sang-hwa’s time is much better than her female teammates’, she trains with the men’s speed skating team. Despite her youth, Lee is known as a tough competitor who has successfully endured the rigid training regimen of the men’s team.

Her experience from the Turin Games should also be a huge plus.

Having finished among the top skaters in the World Cup series leading up to the 2006 Olympics, Lee had been expected to stand on the podium four years ago.

However, she finished fifth overall in the 500-meter event.

“A lot has changed since the Turin Olympics. I was young, just a 17-year-old high school student. The experience was overwhelming,” explained Lee.

“I’ve become a lot calmer in competition. And I’ve worked hard to improve my start in order to win.”