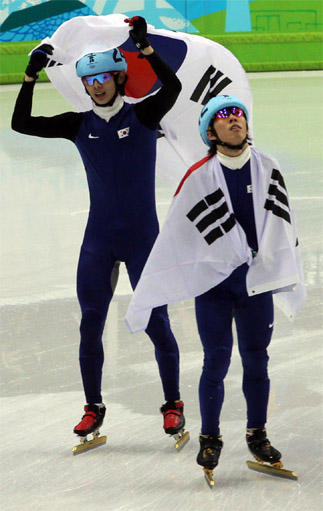 
Even in a sport known for its action-packed races and exciting finishes, Korea's men's and women's teams chalked up a stunning victory yesterday, blazing around the oval rink of Pacific Coliseum to earn four of total six available Olympic medals in the short-track speed skating events.

For Korea, it was the most impressive day of an already astonishing Winter Games.

With six skaters competing on the day, four stood on the winners' podium to collect two-thirds of the honors - one gold medal, two sliver and one bronze.

In the men's 1,000-meter competition, Lee Jung-su won his second gold medal of the Games by crossing the finish line with a new Olympic record time of 1 minute and 23.747 seconds. Since the event was introduced at the 1992 Albertville Winter Games, Korean men have won the 1,000-meters event five of six times, with the 2002 Salt Lake City Winter Games being the only exception.

"Before these Games, people predicted I would get three gold medals and I'm very happy to get two, I have one more to go," stated Lee in a post-race interview.

And Lee Ho-suk redeemed himself for the accident wiped out him and Sung Si-bak in the 1,500-meter finals last weekend. His silver medal was a repeat performance of four years ago, when he finished second behind teammate Ahn Hyun-soo.

The third Korean skater, Sung Si-bak, failed to survive the semifinals, coming in third behind Ohno and Francois Hameline. Sung finished a mere 0.006 second behind the Canadian skater.

In the female 1,500-meter event, the battle for first place came down to three Asian teenagers. Lee Eun-byul, 18, finished second with Park Seung-hi, 17, in third to give Korea's women's short-track team its first medals. China's Zhou Yang, 18, proved to be too much for the Korean skaters.

China's Wang Meng, the favorite coming into the race, was disqualified in the semifinals for coming in contact with American Katherine Reutter. With its strongest skater, Wang, out and Zhou the lone representative from China, the three Korean skaters had a solid shot at sweeping the podium. But Zhou proved to be too much, crossing the finish line nearly a full second ahead of Lee and setting a new Olympic record of 2 minutes and 16.993 seconds in the process.

Despite the strong finish, the Korean skaters were dismayed at having lost the gold medal to their rival.

"I am disappointed. We had three Koreans in the final. We could have won gold," Lee told the media. "The Olympics is unpredictable. With all the pushing and hitting during the race, we did not come out so well."

For the women's team, the strong performance in the 15,000-meter event dates back to its introduction at the 2002 Salt Lake City Winter Games. Ko Gi-hyun won the gold six years ago while Jin Sun-yu placed first in the event in 2006 in Turin.

"All three of us could have won. I am thankful that we won silver and bronze, but we should have won a gold medal," said Park.