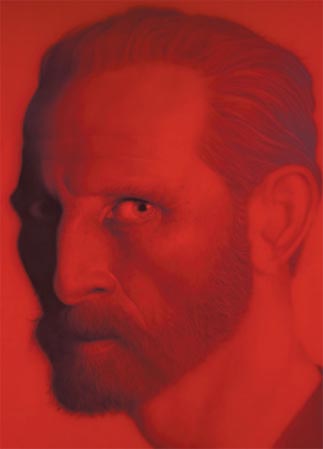 The strikingly realistic “Van Gogh in Red” by the Korean contemporary artist Kang Hyung-koo (1954-) is now being exhibited at the “Artists with Arario” show at the Arario Gallery in central Seoul. Provided by the gallery

Now that the cold weather has abated, the strollers are returning to Samcheong-dong, the culture and culinary neighborhood tucked into the hills behind Gyeongbok Palace. And Samcheong’s famous art galleries have new exhibitions to lure these families in.

One of the most remarkable is a solo exhibition by the famous French-American artist Louise Bourgeois at the Kukje Gallery.

If you’re familiar with Bourgeois’ best-known sculpture, “Maman,” a gigantic bronze spider with long legs, you will probably imagine this exhibit consists of strange, grotesque sculpture.

In fact, on the contrary, Kukje is showing the softer side of Bourgeois with 24 drawings and three sculptures she has made in the last three years. They’re generally gentle and tender, compared to her former works. The drawings, many of which are in a warm red color, depict flowers and human bodies, especially mothers’ bodies, reflected in the exhibit’s title “Les Fleurs,” which means “the flowers.”

“Bourgeois has chosen the title ‘Les Fleurs,’ which speaks to her adoption of flowers and women as symbols of vitality, desire and sexuality,” Kukje Gallery said in a statement. “Her drawings, in a bold, red color, illustrate passion, blood and a feminist belief in the power of women.”

“All the red flowers in her drawings in this exhibition have five petals, and they show her love for her family, as she said the five petals symbolize the five members of her family.” 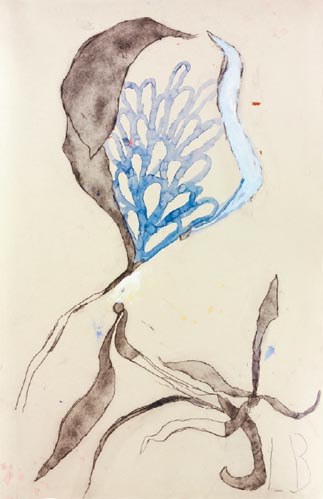 “I Am Still Growing” (2008) by Louise Bourgeois is part of the “Les Fleurs” exhibition by the renowned French-American artist at the Kukje Gallery in Jongno District in central Seoul. Provided by the gallery

Motherhood and family have been major themes in Bourgeois’ works for a long time, but with these drawings her ways of dealing with them have changed.

The series of bronze spiders she made in the 1990s is also a more abstract depiction of motherhood, as their names meant “mother” in English. The spiders are threatening, with their long legs casting menacing shadows. But viewers are often surprised to find a sack full of eggs under the spider’s body. Some art critics said the sculpture showed both the powerful and weak aspects of motherhood, and were an expression of how much Bourgeois missed her mother, who was lonely due to her unfaithful husband.

In contrast, the drawings in this exhibition show Bourgeois’ satisfaction with and love for her own family, including her husband and her three children, instead of her sadness regarding her mother and her antipathy against her father, Lee explained. She said that the repetition of drawing helped Bourgeois find “peace of mind and a source of healing.”

The three sculptures in the exhibition, which are bronze casts of Bourgeois’ own sweaters painted in white, also give a warm impression. Visitors will have a chance to compare these with her famous bronze spiders, some of which sit in the courtyard of the gallery and can be seen through a big window in the exhibition hall.

It is difficult to define Bourgeois’ art in one word, Kukje Gallery emphasized. Born in 1911, she began her career in her 20s, but she wasn’t “discovered” until the 1970s, when she was in her 60s. She became the first female artist to hold a retrospective at the Museum of Modern Art in New York in 1982.

Another remarkable exhibition now under way in Samcheong-dong is the “Artists with Arario” show at the Arario Seoul. The gallery is located in a back alley near the Artsonje Center.

This is the first joint exhibition by all 18 artists who have been represented by the Arario Gallery in the last five years, the galley said in a statement. Parts of the exhibition are also taking place at the gallery’s Cheonan headquarters in North Chungcheong.

The Arario event features a big red portrait of Vincent van Gogh painted in a hyper-realistic style by the contemporary Korean artist Kang Hyung-koo. Kang’s sculptures, which look like the dinosaur skeletons exhibited in natural history museums but depict cartoon characters, are also on display.

*The “Les Fleurs” exhibition runs until March 31 at the Kukje Gallery. For more information, visit www.kukje.org or call (02) 735-8449. The “Artists with Arario” exhibition runs until March 21 at Arario Gallery’s Seoul and Cheonan halls. For more information, visit www.arariogallery.co.kr or call (02) 723-6190. All the exhibitions are free, except the one in Cheonan.