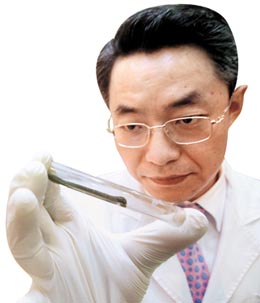 A patient with a pressure bandage on his left foot entered the office of Oriental medicine doctor Han Dong-ha at the Korean Biotherapy Association in Seocho, southern Seoul, on Feb. 19.

Park Young-min had been suffering from varicose veins on his foot, and the pain had become tortuous.

“Even if I get only a little bit of stress from overwork, my foot swells up,” said Park.

As Park lay on a bed, Han, 40, the president of the association, came in holding a small tube-like bottle with six two- to three-centimeter long (0.7- to 1.1-inch) leeches inside.

“I haven’t fed these leeches for the last six months. I think they are hungry for blood,” Han said.

As soon as Han put the leeches on the patient’s foot, they began to suck. About 20 minutes later, they had swollen to some 10 centimeters long.

“Other treatment methods were not so effective, but the situation got better since leeches were used,” said Han.

Han is known here as “The Leech Doctor.” He has an extraordinary love for and deep interest in the worms.

Currently, there are some 10 Oriental doctors in Korea who apply leeches as a means of biotherapy, and Han is at the front of the field.

When Han was young, the leech was universally despised in Korea. But he conducted research into the creatures while he in a master’s degree program in Oriental medicine at Kyung Hee University in 1999.

Leeches are widely used to cure asthma in China, and have been used medicinally in various cultures for millennia.

Though their popularity dropped off as the practice of bloodletting fell out of favor in the early 20th century, leeches have been making a resurgence in the medical world.

Han’s research centered on whether a leech extract could be effective in curing asthma and atopic disease. To his surprise, he found a significant remedial effect.

So since 2004, the doctor has been publicizing the medical characteristics and effectiveness of leeches on his personal blog, titled “Leech, my love.” He earned his supervillain-like nickname from his blog’s readers.

Nowadays, Han is using leeches to treat patients suffering from Buerger’s disease, a disorder that damages or destroys skin tissue and leads to infection as blood vessels become blocked with clots, as well as diabetic foot ulcers. Of 10 of Han’s Buerger’s patients who began using leeches in 2005, the doctor says eight have completely recovered, while three of his 10 patients with diabetic foot ulcers experienced full recovery.

Han defines the leech as both a “skilled physician” and an “industrial animal.”

Leeches used for medical purposes are imported from England and France. The imported leeches, worth 20,000 won ($17) apiece, are three to four times larger than Korean leeches.

The doctor said the Korean leech cannot be used for treatment due to its weak blood-sucking capability.

The Food and Drug Administration in the United States has officially recognized the medical leech as capable of easing the aftereffects of surgery. But Han warns that they should not be used without expert supervision.

“If leeches are used thoughtlessly, there’s a high chance of scarring and skin infection,” he said.