Finals, but no medal for Korean bobsleigh team

Finals, but no medal for Korean bobsleigh team 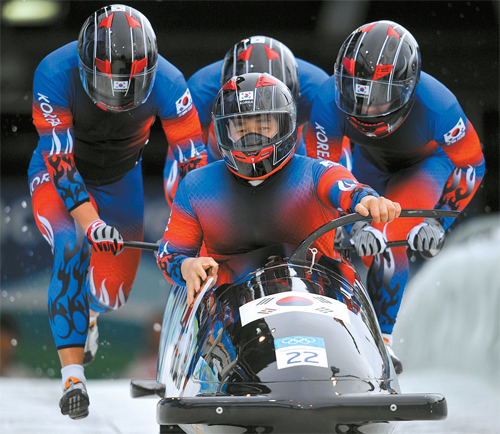 The Korea-1 team piloted by Kang Kwang-Bae (front) start heat 3 of the four-man bobsleigh event at the Whistler Sliding Center during the Vancouver Winter Olympics on Feb. 27. [AFP/YONHAP]

WHISTLER, Canada - Competing in the Olympics for the first time, Korea’s four-man bobsleigh team made a surprise move into the finals as the lone Asian squad and finished 19th overall in a 20-team field at the Whistler Sliding Center.

Led by Kang Kwang-bae, the Korean four-man squad qualified for the finals with the 19th best overall record. The Korean team clocked in at 52.92 seconds in the finals for a four-run time of 3 minutes 31.13 seconds.

The team had faced financial difficulties in the past and Korea still does not have an official bobsleigh course. In a congratulatory message sent to the team, President Lee Myung-bak said, “Your strong will and spirit of overcoming challenge has moved our people.”

The gold medal went to the Americans. With one more perfect run down sliding’s most treacherous track, Steven Holcomb drove USA-1 to the Olympic gold medal in four-man bobsledding Saturday, ending a 62-year drought for the Americans in the event.

It was the first gold medal for the United States in sliding’s signature race since Francis Tyler won one for the Americans at St. Moritz, Switzerland, in 1948.

Holcomb’s four-run time was 3 minutes 24.46 seconds, with Justin Olsen, Steve Mesler and Curt Tomasevicz pushing for him again - just as they did in winning the world championship a year ago.

German Andre Lange, who failed to win a gold medal for the first time in five Olympic events, had a nearly perfect final run to win the silver in his last race. Lange finished 0.38 seconds behind Holcomb and his team.

Holcomb and his sledmates crossed the finish line, then wrapped each other in American flags. Holcomb hoisted his helmet high as family and friends craned for photographs, and a party the U.S. program waited 62 years to throw was finally getting under way.

“This will take a while for it to sink in,” Holcomb said. “You work so hard, and when you finally get there it’s like, ‘Well, now what? I don’t know what to do.’ We’ve worked so hard and gone through so much in the last four years to end on a high note like this is huge. It’s overwhelming.”

USA-3 driver Mike Kohn was a push athlete for Shimer’s sled at those 2002 Salt Lake City Olympics, when Todd Hays drove to silver and Shimer got the Americans a bronze.

“It’s huge,” said Kohn, who finished 13th. “This is a great moment. It’s hopefully going to change the program and bring some publicity and some funding to this sport, just like it did in ’02 when we won silver and bronze.”

Minutes after it was over, Tomasevicz pulled off Holcomb’s hat, planting a smooch on his pilot’s bald, sweaty head.

Sealed with a kiss, it was, and then the four men stood atop the podium for the flower ceremony at trackside - medals came later Saturday night - and did what’s known as the “Holcy Dance,” the little shuffle step that Holcomb does to keep his team loose.

From there, Holcomb hugged anyone he could wrap his giant arms around, and Mesler hopped the wall of the bleachers to celebrate with his family.

“It means an awful lot,” said Darrin Steele, CEO of the U.S. Bobsled and Skeleton Federation. “This has been a long road. But all the components came together. You put a sled and a team together, and you never know how it’s going to go.”

It wasn’t long ago that Holcomb had 20-500 vision - “profound visual impairment” - that could have ended his bobsledding career before he managed to scrape up $15,000 to have contact lenses embedded behind his iris to correct a degenerative condition. He’s bobsled’s best now.