Her sights are on the summit and the record

Her sights are on the summit and the record 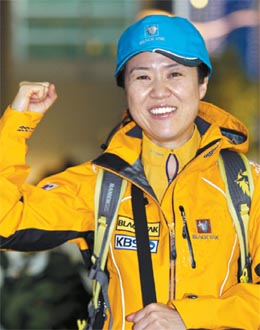 And she has only one mountain left to climb.

If Oh, who departed for Nepal yesterday, successfully summits the 8,091-meter Annapurna, she will achieve her monumental goal.

She’s facing competition. Edurne Pasaban of Spain has conquered 12 eight-thousanders to date and she’ll attempt to climb both Shishapangma and Annapurna this spring.

Oh boarded an airplane for Kathmandu yesterday morning at Incheon International Airport. She will train near Annapurna until late March, set up base camp in early April, and make her first attempt on April 25. If she falters, she will make a second attempt in early May, with a third attempt possible in mid-May.

Oh came close to conquering Annapurna last October, but the veteran climber had to give up after heavy snowfall hampered visibility. She is intent on achieving her goal this time around.

“It’s a little nerve-wracking but having made the attempt last year, I am confident and I’m also in a good physical condition,” she told the media at the airport.

“I have no intention of going against nature. If the weather conditions do not permit, I will turn back. But I will make several attempts.”

Oh climbed her first eight-thousander, Gasherbrum II, in 1997. It would take seven years before she scaled her next Himalayan peak, Everest, but she has been on an impressive pace since.