[In-depth interview] A campus with an international bent

[In-depth interview] A campus with an international bent 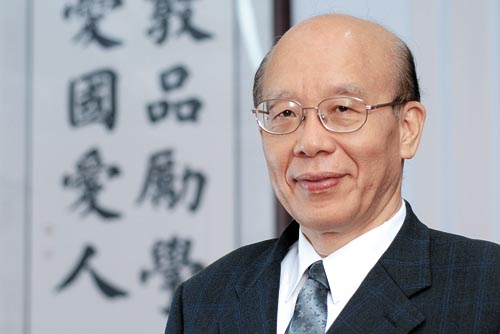 A fair share of foreign faces stood out in the crowd. One French student, a freshman majoring in political science, said she is able to learn bits and pieces of many different languages thanks to the campus’s diversity.

The university’s president, Lee Si-Chen, is known as a champion of globalization at his institute. In an interview last month at his office, Lee insisted that creating an international environment starts with the faculty.

“If professors don’t get stressed out, the university can’t improve,” Lee said.

Lee said the university evaluates the performance of some 1,900 faculty members before deciding whether to retain them.

“In our professors, I find the starting point on our road to become a top-notch global university,” said Lee, who earned his master’s degree and Ph.D. in electrical engineering from Stanford University. “If Asian universities are to compete with schools from all over the world, it’s important for them to have an open academic atmosphere and welcome foreign students with open arms.”

The soft-spoken Lee sat down with the JoongAng Ilbo for an hour, touching on everything from the university’s approach to globalization to his thoughts on tenure.

Q. Tell us more about your school.

A. National Taiwan University has been around for 82 years. It’s the largest of 149 four-year universities [in Taiwan]. We have 33,000 students, 17,000 of whom are undergraduates. The rest are graduate students and Ph.D. candidates. We have 11 colleges, 54 departments and 102 graduate courses.

What are your specific plans for globalization?

Of our undergrads, about 2,500 are foreign students, and 1,800 of them are studying for degrees. We’ve already made significant progress in globalization. We have ties with 310 universities worldwide, including 12 Korean schools such as Seoul National University and Korea University.

But it’s also important to send your students overseas, isn’t it?

Yes. The core part of our globalization strategy is to set up a system in which more than a third of our undergraduates study for at least a year at an overseas university. That would really help improve our competitiveness.

National Taiwan University and other Asian universities lag behind American and European schools in competitiveness. How are you addressing this issue?

National Taiwan University tied for 95th in the London Times World University Rankings last year. By subjects, we were 60th in arts and humanities, 40th in life sciences and 45th in biomedicine. We need to move up the chart. Chemistry, medicine and electronics are our strengths. We will get past the National University of Singapore [30th overall] within a couple of years. Korea’s Seoul National University [47th] and Kaist [69th] were ahead of us in the Times rankings, but we were ahead of the two in Shanghai Jiao Tong University’s rankings.

How do you pit professors against each other?

We adopted the faculty evaluation system in 1998. We have different applications for assistant, associate and new professors. New instructors are evaluated every three to five years, and others within five years of teaching at the school. The retirement age is 65, but we don’t have the tenure system. Those who fail the evaluation process must be re-evaluated within one or two years. Faculty members who fail the re-evaluation are released. [The school’s statement says such professors are submitted to the school’s evaluation committee, which decides whether to renew or discontinue the hiring contract]. About two to three professors pack their bags each year. The effects have been tremendous. There’s a great deal of stress and tension.

How do you evaluate your professors?

[The standards] differ among colleges. Generally, on a scale of 100, we weigh 40 for research, 40 for lectures and 20 for service. Those who feel they won’t pass the process walk out of the school. There are more professors who leave voluntarily than those who are forced out. This has really worked and that’s why I said professors’ stress is the fuel that powers the university. Those with good performance are exempt from evaluation.

Many universities in Korea are trying to eliminate tenure systems. If evaluation is exempted, wouldn’t that lead to a different dispute surrounding the tenure system?

Korea is dealing with problems regarding private education. What’s the situation in Taiwan?

It is just as serious as in Korea. It’s probably due to the passion and enthusiasm common among Asian parents. [Students] don’t necessarily have to attend private institutes, but parents fret over that. My daughter and son and I never received any private teaching and we all went to top high schools and universities. It’s really up to the parents.

National universities in Korea select their presidents in a direct election. But that has caused friction.

In Taiwan, the presidential election committee picks the university head. Professors, alumni and bureaucrats from the Ministry of Education serve on the committee.

The term is for four years and you can be re-elected twice. The Education Ministry doesn’t overly concern itself with schools’ academic affairs. Universities also take care of admissions issues.