KT has the edge in coming series vs. KCC

KT has the edge in coming series vs. KCC 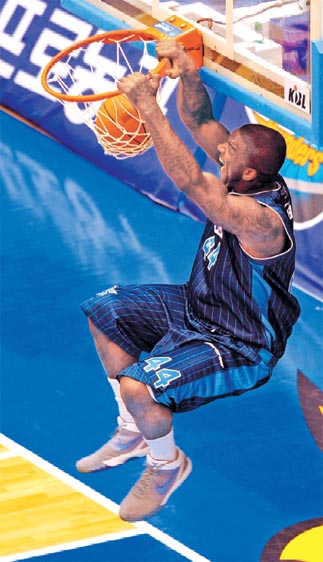 Ivan Johnson slams home two of his 38 points of the night in game four of the first-round KBL playoffs game on Wednesday night in Jamsil, southern Seoul. [NEWSIS]

Reigning champions KCC Egis are one step closer to defending their title. Having won the first-round series over the Samsung Thunders on Wednesday night, KCC will now face KT Sonic Boom in game one of the Korean Basketball League semifinals best-of-five series starting on Sunday in Busan.

The series features KCC head coach Hur Jae and KT head coach Chun Chang-jin. The two former players are good friends off the court and faced each other in the semifinals last year when Chun coached the Dongbu Promy.

“We have the height advantage,” Hur said in a postgame interview. “And even though we’re missing Ha Seung-jin from our lineup, we gained a lot of confidence from this win.”

Height advantage aside, KCC enters the series as the underdog: The Sonic Boom was the surprise team of the season. After finishing dead last in league standings in two consecutive seasons, KT finished the season as the second-best team in the league.

KT is well rested after a bye in the first round, while KCC is coming off four games in the opening round of playoffs against Samsung. KT also has the edge in six head-to-head regular season matchups between the two clubs, with four wins and two losses.

KT lacks talent depth in its roster but, under Chun’s leadership, makes up for its shortcomings with strong team play. The club will rely heavily on its big men Nigel Dixon and Jasper Johnson, who have a combined average of 31 points and 12.5 rebounds in the regular season, and steady play from its top guard, Shin Ki-sung, who averaged seven points and 4.6 assists in the regular season.

As was the case in the first round, the outcome of the opening game of the series will be pivotal. In the history of the KBL semifinals, 20 of 26 game-one winners have gone on to win the title.

KCC eliminated the Samsung Thunders from postseason play with a 99-86 win on Wednesday night. With center Ha Seung-jin out for game one and likely to make his return in either game two or three, the team will have to continue to rely on strong play from point guard Jeon Tae-pung and forwards Ivan Johnson and Terrence Leather.

In game-four action between KCC and Samsung, Leather was ejected early on with a technical foul. Samsung led the game 48-42 at the end of the first half but Johnson and Kang Byung-hyun stepped up while Samsung made crucial turnovers in the late phase of the game. Johnson ended the game with 38 points and 12 rebounds while Kang posted 25 points.