[Sponsored Report] Expansion in Middle East thanks to high technology

[Sponsored Report] Expansion in Middle East thanks to high technology 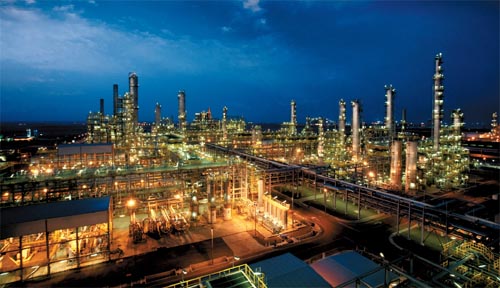 The Sohar Aromatics plant facility in Oman, a project worth 1.2 billion dollars, is the world’s largest of its kind, producing electronics, automobile finishing materials and equipment and nylon textiles. Construction ended recently, and the plant is now online.

GS Engineering and Construction surpassed Hyundai Engineering and Construction to become the No. 1 builder for large plant construction in the second half of 2009. Based on its experience building refineries in Yeosu, GS clinched orders for a liquefaction plant in Iran and a gas project in the United Arab Emirates in June and July, with its reliable technology and price competitiveness. Enjoying continuous success in the Middle Eastern market, GS E&C is cementing its place in the global gas industry.

With the successful completion of the ninth and 10th phases of the Iran South Pars project, GS E&C was acknowledged for its execution of engineering, procurement and construction contracts. It was able to diversify from Saudi Arabia and Kuwait into the rest of the Middle East, Africa and Southeast Asia.

Recently, the company is growing rapidly in the LNG liquefaction plant field from its foundation in oil refineries and petrochemical plants. Once, a few companies from the U.S., Europe and Japan accounted for most of the gas plant market, with Korean companies only given the chance to do subcontracting or work on side facilities. But GS E&C has chosen this field as a new market, and after years of investment, it became the first local firm to sign a turnkey contract in the industry.

That accomplishment makes GS E&C the first company in Korea to notch experience in all fields in the LNG value chain. Since the current plant market is trending towards gas rather than oil, this is a chance to reinforce GS’s competitiveness.

Continuous investment, high technology and price competitiveness have brought GS results. The company bid successfully to build a $3.11 billion RFCC plant for Takreer, a subsidiary of the Abu Dhabi National Oil Company. This is the largest project a local company has ever received an order for without a partner. An RFCC plant changes low-value-added medium-quality oil produced in a ordinary refinery into high-value-added oil.

The company has succeeded in diversifying, acknowledged for its EPC port construction technology.

A senior official of GS E&C, in charge of plant business division, remarked, “This is a major achievement that a Korean company has received an order for the world’s largest scale RFCC construction, showing that GS E&C has been acknowledged highly for its technology. In the future, we expect to occupy the dominant place in large oil refinery and gas plant construction in the Middle East region.”