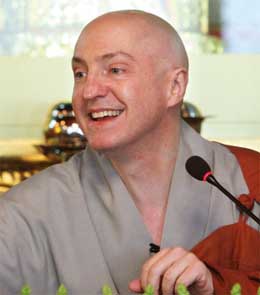 The Venerable Hyon Gak returned from Germany for a visit to Seoul this week. By Kim Kyung-bin

It’s not often that you’ll find a Buddhist monk and author - not to mention a graduate of both Yale and Harvard, to boot - working in the back of a restaurant.

But the Venerable Hyon Gak, who runs a Zen room in Munich, Germany, expects to find himself in that position in the near future.

“Prices in Munich are too high, so I’m planning to wash dishes as a part-time job at some restaurant in order to support the Zen room,” Venerable Hyon Gak said this week during a visit to Seoul. “My teacher, Seung Sahn, worked at a laundromat when he came to the U.S. for the first time. Doing dishes is quite good for asceticism and concentration.”

The Venerable Hyon Gak - who held a Buddhist ceremony in Anguk-dong, Jongno District, central Seoul - has been taking the lead in introducing Korean Buddhism to the world since he became a monk after meeting Venerable Seung Sahn.

He is perhaps best known as the author of “Manhaeng: From Harvard to Hwagye Temple” and has been running his Zen room in Munich since last June.

Venerable Hyon Gak said he left Korea for very specific reasons. “Since I became famous, I’ve been invited to many events and received the red carpet treatment here and there,” he said. “I was ashamed. So I wanted to go far away and live a life of hardship because ascetics like me should live by themselves.”

Venerable Hyon Gak arrived in Korea a day after the cremation rites of Venerable Beopjeong, who died last week.

He said the late Venerable Beopjeong served as an inspiration to many.

“We are so very blessed by his death,” Venerable Hyon Gak said. “We should all strive to be like him.”

The Venerable Hyon Gak said that he likes the Germans’ attitudes toward his faith.

“They tie Buddhism to asceticism, not to belief,” he said. “Thus, they just focus on ‘who I am’ and devote themselves to the study of Buddhism.”

He also said that when Venerable Seung Sahn was alive, the Buddhist leader once talked about how Buddhism is handled differently in Korea and the United States.

“Venerable Seung Sahn said that Koreans know so much about Buddhism that they don’t study,” Venerable Hyon Gak said. “He then said that Westerners only practice asceticism because they know nothing about Buddhism.”

Venerable Hyon Gak is scheduled to return to Germany today.