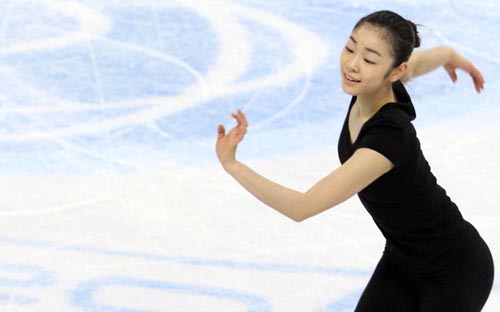 Kim Yu-na participated in her first practice in preparation for the International Skating Union World Figure Skating Championships yesterday at the Pavavela Ice Skating Rink in Turin, Italy. Having won the 2009 World Figure Skating Championships in Los Angeles, Calif., last March, Kim is coming off a gold medal-winning performance at the 2010 Vancouver Olympics. Kim did not make any jumps but checked the condition of the ice in what was the skater’s first and last practice at the world championships venue. “I think I’m not as mentally focused after winning the Olympic gold medal, but I tend to think entering competition without placing too much pressure on yourself can net better results,” stated Kim in an interview with the JoongAng Ilbo. [YONHAP]