Korea cracks the competition in AFC

Korea cracks the competition in AFC 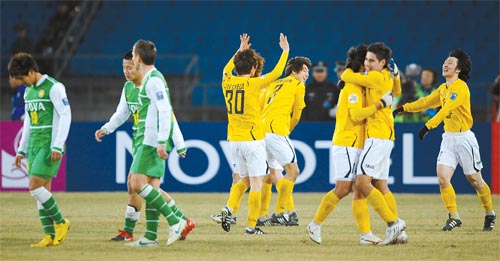 Korea’s Suwon Bluewings and Seongnam Ilhwa Chunma powered into the last 16 of the Asian Football Confederation Champions League on Wednesday as Japan’s Gamba Osaka took a giant step toward joining them.

Suwon made the grade by beating China’s Henan Jianye 2-0, with a first-half strike by Brazilian Jose Mota and a second in the dying minutes from Kim Dae-eui enough to secure its passage from Group G.

Seongnam maintained its unbeaten record in Group E with a hard-fought 1-0 victory over Beijing Guoan in the Chinese capital, with Colombian Mauricio Molina getting the decisive goal with 16 minutes remaining.

The wins give Korea three teams in the knockout rounds. Jeonbuk Motors qualified on Tuesday alongside Japan’s Kashima Antlers. The fourth Korean club, defending champions Pohang Steelers, is well placed to make it four out of four.

J-League stalwarts Gamba, the 2008 Asian champions, inched closer to progressing after a convincing 3-0 win over Singapore Armed Forces, whose campaign ended with just one point from four games. It was a one-sided match, with Gamba firing 20 shots on target in the first half alone.

The team opened its account in the 28th minute when Takahiro Futagawa sent a short corner to defender Michihiro Yasuda, who dribbled into the area and fired home an angled shot. Shoki Hirai, who scored a hat trick in the first leg a week ago, made it 2-0 with a sweet strike in the 55th minute and Brazilian substitute Ze Carlos wrapped it up in injury time.

Melbourne Victory kept its slim hopes alive with its first win of the tournament, beating Japan’s Kawasaki Frontale 1-0 in the other Group E game. Skipper Kevin Muscat, who missed his spot-kick in the Victory’s A-League grand final penalty shootout loss to Sydney FC earlier this month, made amends by converting a 60th-minute penalty on Wednesday.

The match turned on the decision by the Iranian referee to award a questionable penalty to Melbourne after striker Robbie Kruse was brought down. It leaves Kawasaki with three points, three adrift of Beijing in the fight for the second qualifying berth.

In Group A, Iranian side Esteghlal came away with a superb 1-1 draw in Doha against Al Gharafa which sees the visitors retain their one-point advantage. However, Al Ahli of Saudi Arabia is breathing down its neck after doing the double over United Arab Emirates side Al Jazira. A brace by Victor de Oliveira saw the squad move onto six points, just two adrift of the leaders.

On a good day for Iranian sides, Sepahan, beaten finalists in the 2007 AFC Champions League, defeated Uzbekistan Cup winners Pakhtakor 2-0 in the Iranian city of Esfahan, which saw the club reduce the gap between the two sides to just a point. Sepahan won the match with two goals in two minutes of the second half as Senegalese striker Ibrahima Toure opened the scoring in the 74th minute and Iranian international defender Bengar Mohsen added the second a minute later.

The last match of the day’s entertainment saw Saudi Arabia’s Al Shabab go top by a point from Pakhtakor after it prevailed 3-2 at home to the winners of the inaugural AFC Champions League Al Ain. Amado Da Silva scored twice - once to give the hosts a 1-0 lead after 12 minutes and then to bring them level at 2-2 in the second half - before midfielder Marcel Camacho grabbed all three points with seven minutes remaining.