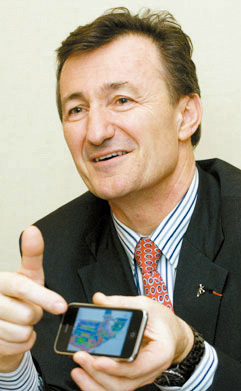 His goal was to develop a next-generation solution capable of managing all processes of shipyard production, one of their areas of focus, from the early stages of design to maintenance and repair jobs.

With Korea’s dominant shipbuilding industry, Charles, 53, decided to search for possible sites within the country. At first, he had his eye on the Busan area for its proximity to the bases of the nation’s shipbuilders at Ulsan and Geoje Island in South Gyeongsang.

But Daegu finally won him over.

“Daegu has a large amount of trained personnel with considerable knowledge of the shipbuilding industry who are capable of developing a 3-D solution,” Charles said during an interview with the JoongAng Ilbo. “Above all, I loved the eagerness that I’ve seen.”

The CEO recently visited Korea to participate in a ceremony held for the establishment of the R&D center.

One of Daegu’s selling points was the mayor’s aggressive marketing activity, the executive said. The mayor actually visited the Dassault Systemes headquarters, located near Paris, to win the bid.

Dassault Systemes will break ground on the campus of Keimyung University, located in the Daegu Gyeongbuk Free Economic Zone, as early as next month.

The R&D center will be the first opened by a global company in the Daegu area. Over the next five years, at investment of 36 billion won ($31.9 million) will fund the shipbuilding industry’s next generation of products, such as cruise liners, yachts and leisure boats. A number of experts have been engaged and the company is recruiting around 20 researchers.

“The Daegu R&D center will be our only research lab in Asia. We will support our customers in the Asian region by linking the Daegu center with our 20 other R&D centers worldwide,” said Charles.

The city of Daegu and the DGFEZ plan to provide their support to ensure the smooth operation of Dassault Systemes’ center. The local government also plans to contribute to researchers’ salaries.

“Some at the headquarters in France raised their opposition to this, saying Korea has inadequate conditions for the protection of intellectual property rights, but public officials from the Daegu region put forth efforts to dispel the opposition,” said Cho Young-bin, CEO of Dassault Systemes Korea.

Charles explained the challenge of software development. “One has to be well-acquainted with the related industry in order to develop high-quality software for it,” he said.

“I am going to gradually expand research cooperation with local universities in a bid to make use of the 3-D technology used for shipbuilding that is widespread among other industries as well as aviation, energy and nuclear power.”