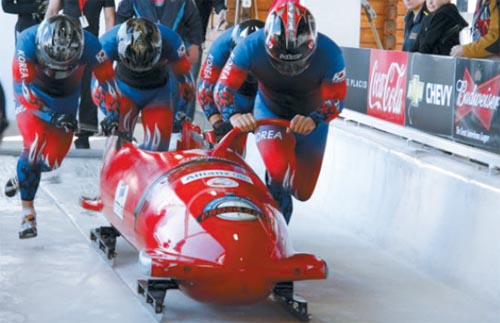 The Korean four-man bobsleigh team ended the 2009-10 season on a high note with a second-place finish, Korea’s best ever at an international event, at the FIBT America’s Cup four-man bobsleigh race at Mount van Hoevenberg in Lake Placid, New York, early yesterday.

In the international federation of bobsleigh and tobogganing’s final bobsleigh and skeleton event of the season, Kang Kwang-bae, Lee Jin-hee, Song Jin-ho and Kim Dong-hyun finished with a combined time of 1 minute 55.42 seconds, taking second place behind the American team of Ethan Albrecht-Carrie, Travis Armbruster, Daniel Duckworth and Joseph Whisher. The Americans finished in 1 minute 55.34 seconds.

With the season concluded, Korea is ranked 33rd out of 72 in the FIBT world rankings in the four-man competition.

“Coming off the Olympics and competing in the final event of the season, we wanted to do well,” Kang told Yonhap News. “After finishing first in the first heat, we were hoping for a gold medal but had to settle for a silver. I’m proud of my teammates for putting together Korea’s best finish under difficult circumstances.”

Korea’s previous best finish at an international event was third place at the 2008 America’s Cup events in January and April of 2008.

The Korean bobsleigh team had qualified for the 2010 Vancouver Olympics for the first time despite lack of funding and training facilities. It went onto qualify for the four-man bobsleigh finals and placed 19th overall in a field of 21 teams with a combined time of 3 minutes 31.13 seconds.