2-1 win takes Chelsea to the top

2-1 win takes Chelsea to the top 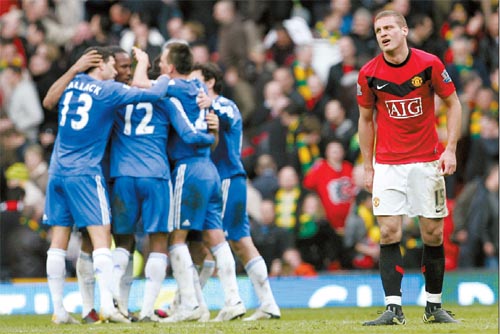 LONDON - Chelsea replaced Manchester United at the top of the Premier League with a 2-1 victory at Old Trafford on Saturday, while an injury-time winner by Nicklas Bendtner put Arsenal back in title contention with a 1-0 triumph over the Wolves.

Joe Cole’s audacious flick gave Chelsea the lead in the 20th minute. Substitute Didier Drogba made it 2-0 with a controversial goal in the 79th, although the Ivory Coast striker looked well offside when he collected Salomon Kalou’s pass.

Federico Macheda replied two minutes later but Chelsea hung on to complete a league double over United this season and move two points ahead at the top of the standings.

“It was an important victory because we won at the home of a strong team,’’ Chelsea manager Carlo Ancelotti said.

“Unfortunately, nothing is decided yet and we have to stay focused.’’

“Chelsea are favorites now, there’s no question,’’ Ferguson said. “Five games left and they are two points ahead, four goals difference better than us. They are in the driving seat.’’

The United boss will inevitably have been concerned by the lack of scoring opportunities generated by his side in the absence of Wayne Rooney’s talismanic influence.

Rooney, sidelined for up to three weeks by an ankle injury suffered in the defeat in Munich last week, will be missing again on Wednesday and Ferguson underlined the importance of his teammates stepping up to the plate in what could now be the match that defines their season.

“We have to lift ourselves. It is so important,” Ferguson said. “We are trying to get into the semifinal of the European Cup and a final in Madrid is beckoning. That is incentive enough.”

Chelsea has 74 points, United 72 and third-place Arsenal has 71 after a late winner over the lowly Wolves at Emirates Stadium.

The Wolves, unbeaten in four previous games, looked set for a point even though defender Karl Henry was sent off in the 66th minute for an ugly foul on Tomas Rosicky.

But substitute Bendtner headed in the winner from Bacary Sagna’s cross to keep his squad within three points of Chelsea and one of United.

“It’s kept us well in the title race,’’ said Arsenal manager Arsene Wenger, whose team travels to Barcelona in a Champions League quarterfinal tomorrow. “For us, it was important for us to forget Barcelona for 24 hours and focus on today’s game and that was not easy.

“At the end of the day, we left it late, as many other times, but overall we deserved to win the game.’’

Manchester City scored three goals in the first seven minutes and led 5-0 at halftime on the way to a 6-1 victory at next-to-last Burnley to replace Tottenham in fourth place.

In the race for the fourth Champions League spot, City now leads Tottenham by one point with Liverpool and Aston Villa both five points behind.

Tottenham went down 3-1 at Sunderland with former Spurs striker Darren Bent scoring twice and missing two penalties. Aston Villa won 1-0 at Bolton. Liverpool is not in action until it visits Birmingham yesterday.

Down at the foot of the standings, Portsmouth was held 0-0 at home by Blackburn and is all but relegated. But Hull tumbled 2-0 at Stoke, with Ricardo Fuller and Liam Lawrence scoring for the home side.

In yesterday’s other games, 17th-place West Ham visits Everton and Fulham hosts Wigan. Newcastle came from behind to win 3-2 at last-place Peterborough to move even closer to promotion to the top flight.