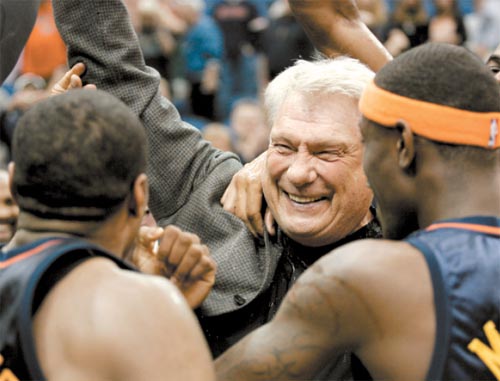 Golden State Warriors coach Don Nelson celebrates with his team after breaking the record for career coaching victories after the Warriors beat the Minnesota Timberwolves 116-107 in an NBA basketball game on April 7, in Minneapolis. It was Nelson’s 1,333rd win. [AP/YONHAP]


MINNEAPOLIS - Don Nelson, one of the NBA’s true mavericks, is now the league’s winningest coach.

Nelson set the career record for victories in the Golden State Warriors’ 116-107 win over the Minnesota Timberwolves on Wednesday night, notching win No. 1,333 to surpass Lenny Wilkens, who was named as the coach of the Korean national team Monday.

Stephen Curry had 27 points, 14 assists, eight rebounds and a career-high seven steals and Anthony Tolliver scored a career-high 34 points to get Nelson over the hump.

But the Warriors closed the game out at the free throw line and Ronny Turiaf poured a cup of Gatorade onto Nelson’s gray head of hair as the team engulfed their 69-year-old coach to celebrate.

It was extra special for Nelson to break the record in Minnesota. He has a daughter who lives in the Minneapolis suburb of Minnetonka and had 20 family and friends at the game, including his wife.

He wasn’t in a reflective mood before the game, but said he has been in contact with Wilkens as he has approached the record.

“Lenny’s been an idol of mine for a long time,’’ he said.

This has been a long season for the Warriors (24-54), who have been ravaged by injuries and are a lock to finish with their fewest wins since 2001-02, when they won only 21 games. But in some ways, this was the perfect team to take Nelson to the top of the record books.

The Warriors have called up five players from the Development League this season, which is tied with the 2007-08 Spurs for the most in one season. Tolliver and Chris Hunter - who both played big roles in the record-setting win - are former D-Leaguers and C.J. Watson and Azubuike also have played there in past seasons.

Nelson has built a reputation as a “mad scientist,’’ experimenting with lineups and offensive sets to cater to teams that were not always the biggest, strongest or most talented. In his first stint with Golden State in the late 1980s, he employed the famous ‘’Run T-M-C’’ lineup of guards Tim Hardaway, Mitch Richmond and Chris Mullin to make the Warriors one of the more entertaining teams in the league.

Nelson got his first head coaching job with Milwaukee in 1976 when he replaced Larry Costello 19 games into the season. He has also coached the Dallas Mavericks and New York Knicks and returned to the Warriors in 2006-07, when he led the eighth-seeded team to an upset of top-seeded Dallas in the first round of the Western Conference playoffs.

Through it all, Nelson has always done it his way. He’s clashed with players, management and ownership at various stops along the way and is the only coach with at least 1,000 career victories who has yet to be inducted into the Hall of Fame. But Nelson has survived through it all in an industry where service time is measured in months, not years.

“The success he’s had, the longevity he’s had, it’s tough to be a coach in this league and to stick around as long as he has,’’ Timberwolves coach Kurt Rambis said before the game. “To have the success that he’s had, the numerous situations he’s been in. He’s done a great job.’’

The Warriors missed their first chance to set the record in a loss at Washington on Tuesday night. But in the second night of a back-to-back, they shot 60 percent in the first three quarters to build a 27-point lead.

Curry, who was passed over by the Timberwolves in favor of Jonny Flynn and Ricky Rubio in June’s draft, was sensational. He made 12 of 22 shots and ran the team like a veteran, finding Tolliver and Hunter for easy baskets in the paint all game long.

With leading scorer Al Jefferson out because of personal reasons, the Timberwolves didn’t have near enough offense to keep up.