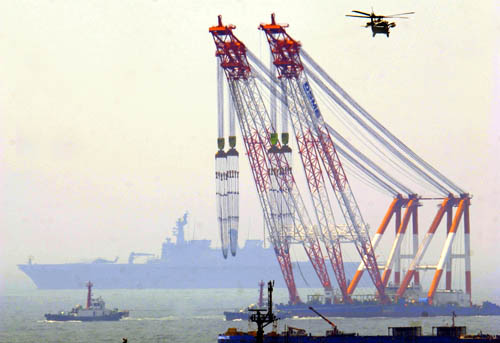 A giant floating crane, the Daewoo 3600, yesterday moves toward the site where the Cheonan sank on the night of March 26 to salvage the stern of the Navy corvette. The crane arrived near Baengnyeong Island yesterday morning. [NEWSIS]

Family members of the soldiers who went down with the Navy corvette Cheonan said yesterday that they believe the 44 missing sailors are trapped in the stern of the ship.

Lee Jeong-guk, one of family members representing the sailors’ relatives, said during a media briefing at the Second Naval Fleet in Pyeongtaek, Gyeonggi, that what mothers of missing personnel most wanted to ask during a meeting with 39 survivors on Thursday was where their children were in the vessel when it went down.

The 1,200-ton Navy patrol ship sank after a mysterious blast tore it in two on the night of March 26. Among 104 crew members on board, 58, including the captain, were pulled to safety. The bodies of two other sailors were recovered from the stern of the sunken ship.

“After talking with the survivors, the relatives have concluded that all the missing crewmen might be stuck in the rear section of the ship,” Lee said. “The mothers gained faith that their children are trapped in the rear portion and the wreck will soon be pulled up.”

Lee also said that the families are considering asking to meet again with the rescued crew. Some family members did not attend Thursday because they had not been correctly notified of the meeting’s date and time.

“Several relatives who are living in [the country] are very displeased with the military that they were not informed properly,” said Lee. “But we cannot simply ask for another meeting with survivors thoughtlessly. We will first consult with officials at the Armed Forces Capital Hospital [in Seongnam, Gyeonggi] and then request a second meeting.”

After having face-to-face talks with families of missing men, the 39 survivors wrote letters to the missing crew and their relatives.

The letters are posted on a wall in the temporary housing for family members within the Pyeongtaek fleet.

One letter read, “I am so sorry. All I can say is that I am sorry. I am sorry that we were rescued alive and our comrades were left behind.”

“I feel so guilty that I was rescued alive. I want to see you smile,” read another.

Mothers wept as they read the letters.

Most of the letters were written anonymously, but some carried the full names of survivors.

Meanwhile, the Navy is considering making an exception to the rule that limits the families of missing sailors to a six-month stay in military facilities.

“We want to satisfy the relatives’ demands in order not to hurt them anymore,” said a naval officer on condition of anonymity at the Navy headquarters in Gyeryongdae, South Chungcheong.