Hong: Openness is key to future

Hong: Openness is key to future 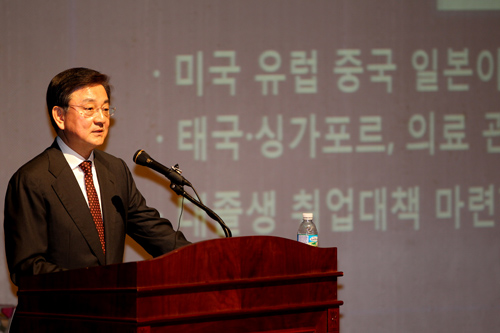 Hong Seok-hyun, chairman of the JoongAng Media Network, gives a special lecture yesterday at Sogang University as part of its series to celebrate its 50th anniversary. By Oh Jong-taek


If Korea wants to play a crucial role in Northeast Asia, it needs to guarantee freedom and open-door policies so that it will become a place where people from all nations want to visit and live, Hong Seok-hyun, chairman of JoongAng Media Network, said yesterday.

“The freedom and openness will turn the risk to an opportunity which will lead us on a path toward prosperity again,” Hong said in a special lecture commemorating the 50th anniversary of Sogang University. “In the 16th and 17th centuries, the Netherlands surpassed then-world superpower Spain and become the world’s economic powerhouse only because it fully guaranteed freedom of the press, ideology, religion and economy. That was when European intellectuals and the wealthy class flocked to the Netherlands.”

Sogang University has prepared a series of special lectures by influential figures which began Monday to commemorate its 50th birthday. Hong spoke on the theme “The new era of Korea, China and Japan,” and the 460 seats in the university’s auditorium were fully packed with students.

In his hour-long lecture, Hong said the new era could be a threat or an opportunity for Korea. If it wants to create an opportunity, Koreans should act like heroes, taking a leading role in certain situations, he said.

“When U.S. President Obama successfully passed the health-care reform bill, he said, ‘We don’t fear the future; we shape the future,’ and his words apply to us, too,” he said. “The U.S.-Korea alliance should be the basis of our diplomacy in the 21st century.”

Sogang University’s special lecture series will continue through May. Today, National Assembly Speaker Kim Hyung-o will lecture on “The future of Korean politics and the dream of a young man.” Hanjin Shipping CEO Choi Eun-young is scheduled to lecture tomorrow and Prime Minister Chung Un-chan will visit the campus to give a special lecture on May 11.