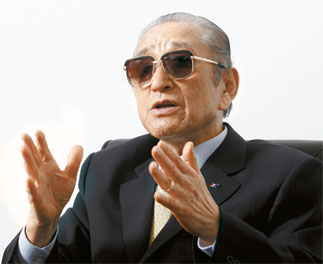 Since it was established in 1960, KD Group has become the biggest bus transportation operator in the country. It operates 15 bus companies, including Kyeonggi Express and Daewon Express, employs 9,500 drivers and has a fleet of 5,000 buses. This accounts for 12 percent of all passenger buses in Korea. The group’s buses transport nearly 2 million passengers a day.

The group celebrated its 50th anniversary at its training center in Icheon, Gyeonggi, on April 1.

“I’ll treat you like VIPs. Please do the same for the passengers,” the group’s chairman and founder, Huh Myong-hoi, 79, said to his employees at the ceremony, as he cut a traditional Korean rice cake with 14 of the group’s labor leaders. The chairman has been called the “king of the bus industry” in Korea.

Huh believes that drivers will drive more safely when their life is stable. The group has a good reputation for taking care of its employees so it is popular among drivers and their families.

The group’s mandatory retirement age is 60 but employees are allowed to work beyond that if they are in good health.

The group also provides a generous package of benefits. On the day of its 50th anniversary, the group gave out a total of 1 billion won in incentives to 1,700 drivers who have been accident-free for 10 years. It also throws monthly employee birthday parties.

Beginning this summer, the group will provide its employees with uniforms designed by Andre Kim, the renowned Korean fashion designer. Kim had initially declined the job, but Huh was able to persuade him.

“I wanted my employees to feel proud wearing uniforms created by a high-status fashion designer,” Huh said. “Then they will do their best when they are driving.”

Other bus companies have struggled in recent years, losing passengers to subways, but KD Group has continued to turn a profit.

One of the ways the group saves money is by doing everything for itself. The group produces its own uniforms, run bus repair shops, provides fuel through a subsidiary and distributes the food for its 53 cafeterias around the country.

The group buys all of its buses from Daewoo Bus Corp., receiving discounts in exchange. In that way, it was able to reduce the costs associated with training drivers and bus repairs.

“We bought 400 busses last year and paid for all of them in cash,” he said. “That saved us some money.”

To reduce costs, the 15 bus companies all celebrated their anniversaries on April 1. At the ceremony, there were no banners or flower decorations.

“Daewon Express was originally founded in 1971 and we acquired Kyeonggi Express in 1978,” Huh said. “Although the companies were acquired on different dates, we decided to combine their anniversaries to cut costs,” he said, laughing.

Huh started his career in 1961. He says he has taken only 13 days off since he started his own company 50 years ago, including the times when his parents passed away and when he underwent cataract surgery. He has always worked, even on Sundays and national holidays.

“Buses do not have holidays, so how can I take a day off?” he said.

Asked about his last trip, Huh said, “I went to Magok Temple in Gongju with my wife 10 years ago. It was my first and last trip.”