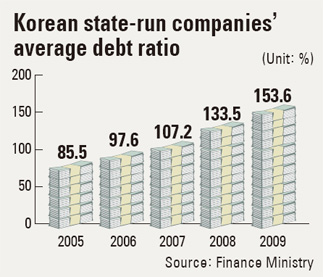 The company’s debt/equity ratio amounted to 524.5 percent last year, up from 465.5 percent, according to the Finance Ministry, which released data yesterday on the debt situation for 23 state-affiliated companies.

The state-owned property sector had the largest amount of debts at 111.7 trillion won ($100.6 billion) among the three main industrial areas operated by the government, which also include energy and transportation.

The debt/equity ratio for the three state property companies amounted to 465.5 percent against 107 percent for state energy firms and 72.2 percent for transport businesses.

Korea Land’s debt burden was the largest among the leading companies in the state corporate stable. It saw its debt rise by 23.5 trillion won last year.

The much smaller state appraisal board had a debt/equity ratio of 868.8 percent, while the Korea Housing Guarantee, which acts as a loan guarantor for housing developers and builders, reported 900 billion won in additional debts last year, pushing up its debt ratio to 69.4 percent.

Total debts for the state property sector rose by 24.3 trillion won last year against an increase in assets of 24.9 trillion won.

The debt problems confronting the state property sector underscore concerns about the nation’s fiscal health after massive stimulus spending in 2008 and 2009.

According to the analysis by the Finance Ministry, the total combined assets of the 23 major state-run enterprises amounted to 352 trillion won last year, up 13.6 percent from 2008, while their combined debts rose by more than 20 percent to reach 213.2 trillion won.

Korea Electric Power Corp., Korea’s fourth-largest listed firm by value, racked up 3 trillion won of new debt due to increased investments on power distribution networks, while the assets rose by a similar amount of 3.1 trillion won. Its debt ratio also climbed from 63.3 percent to 70.3 percent.