On the day for disabled persons, a call for more help

On the day for disabled persons, a call for more help 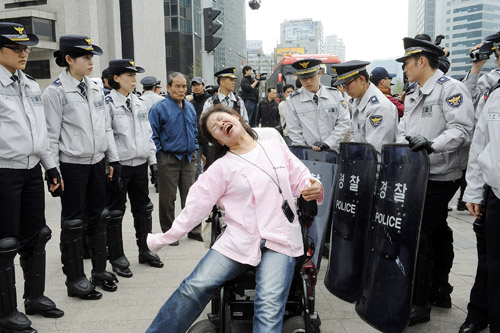 Police block a disabled protester yesterday, Persons with Disabilities Day, in front of City Hall in Seoul during a rally at which about 100 disabled citizens protested the government’s policies and welfare support for the disabled. [NEWSIS]


During a special education class at Anhwa Middle School in Hwaseong, Gyeonggi, Choi Seung-deok, 14, is concentrating on typing at a computer. Sitting in a wheelchair, Choi, who is partly paralyzed from brain damage and cannot use his hands, manipulates a joystick with his foot. He presses the joystick’s enter key, and a picture of a keyboard appears on the screen. Using the on-screen keyboard and joystick, he writes the word “annyeong,” or hello, in Korean.

“He has been able to play games, improve his Korean language skills and read the Bible [after using this special computer],” said Kim Eun-suk, 43, Seung-deok’s mother. Kim said that the computer helps ease her son’s frustrations and lets him communicate with people.

Thanks to technology, a vast number of specialized aids can now greatly improve the quality of life for disabled persons. Unfortunately, the number of people in Korea able to get these tools is limited, and government support is among the lowest in the developed world, an issue that resonated yesterday, Persons with Disabilities Day.

“Today is Persons with Disabilities Day, a day in which the government pretends to care about the disabled without giving us any real welfare support for the remaining days of the year,” Park Hyeon, a double amputee who serves as director of the Seongbuk Center for Independent Living, said yesterday during a 100-person strong rally in front of City Hall in Seoul. “They say Korea has embarked on a $20,000 [income per person] era but for people like me, it is more like a $2 era. There is close to no state support for us to carry out a normal, happy life.”

According to the Korea Institute for Health and Social Affairs (KIHSA), the No. 1 reason that people with disabilities don’t have access to specialized aids is the cost. In its 2008 survey of 7,000 disabled Koreans, 51.6 percent said that they didn’t have aids because they couldn’t afford them.

The government does not provide any financial support for these aids.

At the Gyeonggi-Do Assistive Technology Research and Assistance Center, there are over 900 different aids for the disabled. The center lends these aids for a single year to disabled people who register for them. The center has more than 400 people on a waiting list for aids.

“In order for these people to borrow a lift, a spinal corrective aid or stand-up wheelchair, they need to wait for at least a year,” said Kim Ju-yeong, a division head at the center.

At the moment, the Korean government provides financial support for only 12 basic disability aids, including wheelchairs and non-slip bath mats for the lower tier economic group. Last year, the Korean government budgeted 34.3 billion won for the aids in 7,106 different cases, according to KIHSA. The figure is far less than in other developed countries, with Japan’s total in 2006 at 177.3 billion won. In the United States, the budget for disability aids at Medicare, a social insurance program administered by the government, was around 10.87 trillion won in 2002.

“In developed countries, the overwhelming notion is that spending money to provide aids to the disabled, helping them work and pay taxes, is more beneficial in the long run,” said Nam Se-hyeon, a researcher at the Korea Disabled People’s Development Institute (KDPDI).

Although basic aids like canes and hearing aids are provided under government health insurance, others, including special computer keyboards and lifts, are not. The KDPDI said that only 1 percent of disabled Koreans own aids that are not paid for by the government.

Byeon Yong-chan, head researcher at KIHSA, said Korea needs centers like the Gyeonggi-Do Assistive Technology Research and Assistance Center in each city and province “in order to provide assistance to the disabled like a true G-20 country.”

Meanwhile, a Labor Ministry report released Monday said state funds allocated for the disabled were 0.1 percent of the nation’s gross domestic product in 2005, ranking second to last among 23 member countries of the Organization for Economic Cooperation and Development, following Mexico, which allocated zero percent.

Member states which put aside less than 1 percent of the nation’s GDP include Hungary (0.2 percent), Japan (0.3 percent), Canada (0.4 percent), and the United States, Greece and Ireland (0.7 percent).

Norway topped the list with 2.6 percent of its GDP used for the disabled.

An official with the ministry said although Korea has a high employment rate of disabled among OECD members (44.7 percent), “the welfare budget allocated for them is very low. The government needs to make an effort to increase the welfare budget for disabled.”

Jung Jong-hun, 60, has a grown daughter with cerebral palsy. Standing next to his daughter’s wheelchair yesterday near City Hall, Jung said, “She is a 31-year-old adult and it is ridiculous that there is no way for her to support herself in this country without any work programs for the disabled here. It is as though she lives the life of a pariah.”