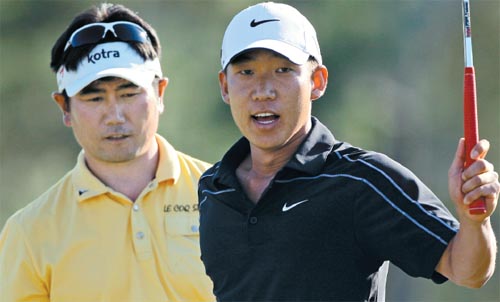 Yang Yong-eun, left, looks on as Anthony Kim raises his club after saving par at the Masters golf tournament earlier this month. [AP/YONHAP]

JEJU ISLAND - Two golfers who placed in the top 10 at this year’s Masters arrived on Jeju Island on Tuesday. They are set to compete in the European Tour event Ballantine’s Championship, which starts today and runs through Sunday at Pinx Golf Course.

Yang Yong-eun, 38, returns to his hometown while Korean-American Anthony Kim, 24, comes back to the place where he made his debut in Korea two years ago.

Because Jeju is an island, the event is notorious for high winds which can wreak havoc with balls. How tough that makes the course is up for discussion.

“I’ve competed in Europe and the wind condition is far worse there,” said Yang.

“When I played here two years ago, I thought I was going to get blown away by the wind. It’s a good thing I weigh a lot,” said Kim.

The two golfers have crossed paths in the past, and even partnered at the 2010 Masters. Most of the attention in Augusta went to Tiger Woods and his partner Choi Kyung-ju, but Yang and Kim more than held their own. Yang placed eighth overall and Kim finished strong on the final day of competition for a third-place finish.

The two golfers are near peak condition as they enter competition today. After winning two events in 2008, Kim struggled with injuries last season. But he bounced back with a win at the PGA Tour Honda Classic in March and won the Houston Open earlier this month. Yang’s last victory came at the European Tour Volvo China Open last week.

The Ballantine’s Championship will feature some of the European Tour’s top golfers, including Ernie Els, who has more than 60 wins including three majors, Henrik Stenson and Graeme McDowell, the winner of the inaugural 2008 Ballantine’s Championship, among others. Miguel Angel Jimenez of Spain will miss out on the event due to flight cancellations.

Yang and Kim are seen as the early favorites to win. Yang has his sights set on taking back-to-back events, and is especially keen to chalk up a victory in front of his hometown fans. But he took the time to compliment Kim.

“My swing alters depending on the situation, but Anthony is always consistent,” he said. “He can drive the ball well and also has great mental focus.”

“Since 2008, I have not fared well in competition due to injuries. During the difficult time, I received a lot of support from the people around me,” said Kim. “My parents encouraged me by saying I should always remember to keep my head up.”