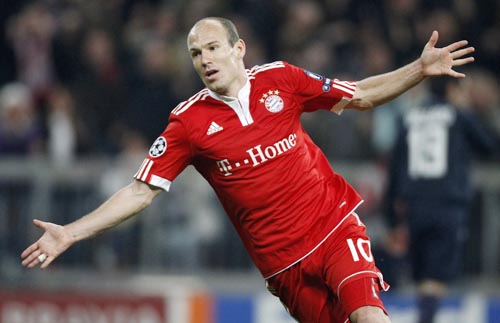 MUNICH - Arjen Robben spared Franck Ribery’s blushes with a spectacular strike to lift Bayern Munich to a 1-0 win over Olympique Lyon in their Champions League semifinal first leg on Wednesday.

The first-half sending-off of Bayern talisman Ribery looked to have swung the tie Lyon’s way, but the French side was reduced to 10 men when Jeremy Toulalan was dismissed and Robben came up with a trademark goal to put the Germans in control. Dutchman Robben, enjoying a superb first season in Germany, smashed in a sweet left-foot shot on 69 minutes that took a slight deflection off the head of teammate Thomas Mueller before flying past keeper Hugo Lloris.

Ribery, in the spotlight this week after being questioned by French authorities as a witness in a prostitution investigation, was shown a straight red card for stamping on Lyon forward Lisandro Lopez’s ankle in the 37th minute.

“I am very satisfied. I think that we showed Europe tonight how strong we are, we showed we dominated with 10 men against 11,” Bayern coach Louis van Gaal told reporters.

Bayern were the more aggressive side from the start, threatening with a Bastian Schweinsteiger header in the 14th minute after Lloris misjudged a corner. Ribery, who was constantly double-marked, managed to break free with some nifty footwork but his shot flew wide.

Bayern increased the pressure in search of a goal but Ribery stunned the sold-out crowd of 66,000 when he lost possession and stamped on Lisandro’s ankle as he tried to win the ball back. Bayern showed no interest in playing safe and again went close with a shot by Danijel Pranjic, who will also miss the return leg after being booked. The numerical balance was restored in the 54th minute when Toulalan was sent off for his second yellow card in three minutes and Robben then took center stage.

He fired a warning shot on the hour which sailed just wide before launching a solo raid from the right wing, cutting in toward the edge of the box and unleashing an unstoppable shot which wrong-footed Lloris.

“We started well but we lost the ball too easily,” Lyon coach Claude Puel said. “In the second half we were too weak with the ball.

“Ribery’s red card allowed us to take control of the match but then we then we had our player sent off. Then 10 against 10 became a very difficult match for us,” he said.

Inter Milan beat champions Barcelona 3-1 in the first leg of the other semifinal on Tuesday.