Pop star Cho is going like 60 to fight cancer

Pop star Cho is going like 60 to fight cancer 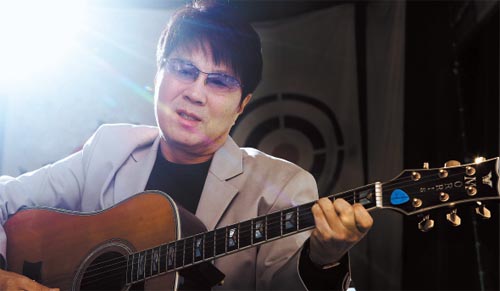 For Cho Yong-pil, the most influential figure in Korean pop music, there’s no such thing as retirement.

On May 28 and 29, just two months after celebrating his 60th birthday, the singer will perform a concert to benefit children with cancer at Olympic Stadium in Jamsil, southern Seoul.

Cho’s goal is to reach 100,000 people in two days. The concert will feature Korea’s first moving stage, six meters (20 feet) above the ground, with images in 3-D.

The benefit “will be the biggest concert ever,” he said.

“Performing in front of tens of thousands of people is always a thrilling experience. Money’s not an issue. If it’s a concert that impresses the fans, I have no choice but to hold it no matter how much it costs.”

The decades have left their mark on Cho’s face, but in the hearts of female fans, he will always remain “Yong-pil-oppa” - an affectionate term for “older brother.” On March 21, his 60th birthday, the most important year for an aging Korean, his fans ran a newspaper ad that read, “We are happy to have you, Cho Yong-pil.”

Cho had had his doubts about performing at 60, but now that the years have actually passed he says he doesn’t feel them. His performances are as energetic as ever.

“I have never felt that my voice has changed because I’m older,” Cho said.

This isn’t the only charity concert Cho has planned. On May 5, Children’s Day, Cho will perform with the London Philharmonic Orchestra at Sorok Island, South Jeolla.

“I’ve often heard stories about children suffering from cancer. This year has a significant meaning for me as I reached the age of 60, and I thought it would be the perfect year to hold a meaningful concert to help those children,” he said. “In fact, I am thinking of holding this kind of concert every year.”

Cho’s love of music hasn’t diminished despite his punishing schedule. Once, after 14 straight days of singing, he was afraid his voice might sound hoarse so he shifted the music half a key lower. He won’t do it again. Cho said the change made him feel like he wasn’t even singing.

“When the inevitable time comes and I have to lower the key, I think I will be disappointed in myself,” Cho said.

“That would be the time when I should start thinking about retirement,” he added.