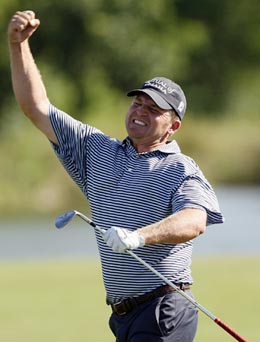 HOUSTON - Jason Bohn delivered a grandstand finish with three birdies in the last four holes to win his second PGA Tour title by two shots at the weather-hit New Orleans Classic in Avondale, Louisiana, on Sunday.

Two strokes clear when the rain-interrupted third round was completed earlier in the day, the American closed with a flawless five-under-par 67 for an 18-under total of 270. Bohn birdied 15, 16 and the par-five last, where he nearly holed out with a wedge approach, to complete a wire-to-wire victory.

“I’m probably the only guy on the PGA Tour who’s got tears when he’s putting out on 18,” Bohn said after ending a five-year title drought on the U.S. circuit. “This is unbelievable.”

Bohn’s playing partner, fellow American Jeff Overton, fired a bogey-free 66 to finish alone in second at 16 under, two strokes in front of compatriot Troy Merritt (67). Double U.S. Open champion Lee Janzen birdied the last for a 69 and fourth place at 13 under.

The tournament came down to a three-way battle between Bohn, Overton and Merritt. Bohn, who had taken a two-shot lead after completing the last 12 holes of his third round in the morning, was caught at the top after Overton birdied the first, fourth and fifth.

PGA Tour rookie Merritt, who covered the front nine in three-under 33, snatched the outright lead with back-to-back birdies from the 10th before faltering with a bogey on 14. Bohn, who won his first PGA Tour title at the 2005 B.C. Open, tightened his grip on the tournament after hitting a superb approach from 218 yards to six feet at the par-four 15th.

After knocking in the putt to edge a stroke in front, he rammed in a 22-footer on the 16th green to double his advantage.