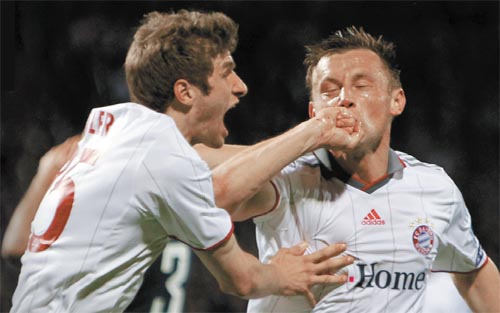 LYON, France - Bayern Munich is headed to the European Champions League football final for the first time in nine years.

“This is the best game of my career,” Olic said. “I can’t find the words to express how happy I am.”

The German power, which overcame the absence of suspended star Franck Ribery, will seek its fifth European title when it plays defending champion Barcelona or Inter Milan in the final on May 22 at Madrid.

“On my first day in charge, I said Barcelona is the best team in the world and the example,” Bayern coach Louis van Gaal said. “Nine times out of 10, Barca would win, but we could win one game.”

Barcelona will try to overturn a 3-1 deficit when it hosts Inter on Wednesday night.

“I would prefer to play Inter,” van Gaal said. “That way I could have a press conference with my friend Jose Mourinho.”

Olic scored in the 26th, 67th and 78th minutes, giving him five goals in his last four European games. He has seven Champions League goals this season, behind only Barcelona’s Lionel Messi, who has eight.

“You have to congratulate this team. They were better in several areas,” Lyon coach Claude Puel said. “Their physical impact was impressive and their rhythm never dropped off. We had to play a perfect match, and that wasn’t the case.”

Lyon captain Cris was ejected in the 59th minute when he received a yellow card for fouling Olic, then was given a second yellow for sarcastically applauding referee Massimo Busacca of Switzerland.

“We tried to play high up the field and pressure their defense, but we hurried things too much when we had possession. We were wasteful with our final ball,” Puel said. “The scoreline is a shame. It is a heavy defeat that has much to do with Cris’s sending off. The sending off ended all our chances, and it became very hard against a team which controls the game so well. A great adventure has come to an end tonight, but we want more of this.”

Bayern won three consecutive European titles from 1974-76, then won again in 2001 when it beat Valencia 5-4 on penalty kicks following a 1-1 tie.

Olic, a 30-year-old attacker from Croatia, scored in injury time to give Bayern a 2-1 home win against Manchester United in the first leg of the quarterfinals, then scored just before halftime at Manchester in the second leg to start Bayern Munich’s comeback from a 3-0 deficit.

Olic scored his first goal Tuesday off a pass from Thomas Mueller and his second following a pass from Hamit Altintop. Olic’s third goal was on a header from a cross by Philipp Lahm, with the shot going in off the hand of leaping goalkeeper Hugo Lloris.

Lyon was appearing in its first Champions League semifinal and was looking to become the first French club to reach the final since Monaco lost to Mourinho’s Porto in 2004.

Van Gaal coached Ajax Amsterdam to the 1995 European title and lost in the final the following year, when Juventus beat Ajax.