Hundreds of thousands of mourners across the nation braved the chill and rain this week to pay tribute to the dead sailors of the Cheonan. They will bid their last farewell to the 46 fallen today at a Navy funeral.

More than 200,000 people visited 46 mourning altars set up around South Korea by 5 p.m. yesterday, including almost 30,000 in Seoul and 25,000 in Gyeonggi Province, despite the unseasonable cold this week.

Mourners yesterday included families of the lost and dead sailors of the Kumyang 98, the fishing trawler that sank on April 2 while returning from a mission to help rescue the Cheonan. The Kumyang families went to an altar at the Second Fleet Command in Pyeongtaek, Gyeonggi.

“The whole nation is mourning, and we’ve come here to pay our respects as Korean citizens, too,” said Lee Won-sang, a representative for the family of the Kumyang victims and a younger brother of missing fisherman Lee Yong-sang. 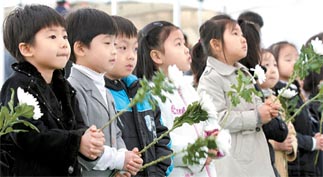 Children hold white chrysanthemums to pay homage at a mourning altar for the fallen sailors of the Navy ship Cheonan in front of Seoul City Hall.

Six Korean crew remain missing from the Kumyang while only two bodies, including that of an Indonesian sailor, have been found.

“Our families have all lost our loved ones. We hope they hang tough through all this,” Lee said.

Yoon Doo-ho, father of the late Cmdr. Yoon Young-ha, also visited the Pyeongtaek altar. Commander Yoon was killed in action during the Second Naval Battle near Yeonpyeong Island between South and North Korea in 2002.

Senior Chief Petty Officer Park Gyeong-soo, one of the six missing sailors from the Cheonan, fought in the Yeonpyeong battle with Yoon. Park was so distraught after the battle that he didn’t go near the sea for almost six years before boarding the Cheonan.

The Navy funeral will start at 10 a.m. today at the Second Fleet Command in Pyeongtaek, Gyeonggi, south of Seoul, and is expected to take about two hours. 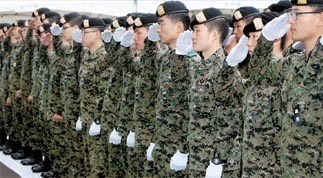 Government officials, foreign ambassadors to Korea, delegations from overseas and active military officials will join the surviving families. The 46 fallen soldiers will posthumously be awarded the Hwarang Order of Military Merit, the fourth highest military distinction in the country.

After the send-off ceremony, the procession will head to the Daejeon National Cemetery farther south, where nearly 45,000 other soldiers are buried. Eighty members of the Navy Honor Guard will line the entrance as surviving sailors from the Cheonan carry portraits of their comrades.

The burial ceremony is scheduled to start at 3 p.m. It will be the largest of its kind since the Daejeon cemetery opened in 1979.

Families of the six missing sailors burned the soldiers’ Navy uniforms, personal belongings or their fingernail or hair clippings at their cremation ceremony yesterday. Sailors embarking on a sea mission surrender nail or hair clippings to be returned to their families in case they are lost at sea.