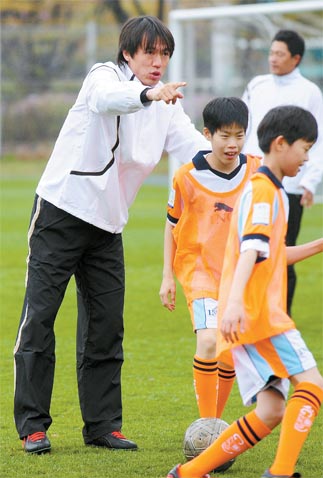 Hong Myung-bo, the manager of the Korean Olympic football team, shows young participants some pointers during a coaching clinic at the Seoul World Cup practice field on April 28. [NEWSIS]

The wind and rain on Wednesday forced many locals indoors yet again as the unseasonably sour weather continued in Seoul.

But about 50 children from the Netherlands and Aloysius Elementary School in Eunpyeong District, northwestern Seoul, filed onto the practice field of Seoul World Cup Stadium to receive guidance and tips on the game of football from some former greats.

The coaching clinic - led by former Korean national team captain and current Olympic squad manager Hong Myung-bo and former star striker Pierre van Hooijdonk of the Netherlands - was spearheaded by the joint Dutch and Belgian bid committee for the 2018 and 2022 World Cup.

Kim Ye-ji, a 12-year-old student at Aloysius who participated in the coaching clinic, was thrilled with the opportunity.

“Though the program itself wasn’t that different from usual, it was so great to receive coaching from renowned football players,” Kim said.

At the end of the hour-long clinic, the Dutch and Belgian bid committee donated $50,000 to the HMB Foundation, a scholarship organization headed by Hong that supports youth football players.

Hong has been awarding middle school and high school football players with scholarships since 2002 before starting the foundation two years later.

At the goodwill all-star match following the donation ceremony, the former greats played a game of five-on-five football.

The Dutch and Belgian side prevailed 2-1 over the Korean team.

“We lost 12 years ago [to the Dutch in a World Cup match] and also today, but I’m glad to see them again after all these years,” Hong said at a press conference following the game. “It’s too early to give a prediction for the 2010 World Cup, but continued support and interest will help produce good results.”

Hooijdonk, who retired from the sport in 2007, said it was “good to visit Korea and see familiar faces.”

“The game reminded me of the 1998 France World Cup,” Hooijonk said.