Medical tourism yet to take off: Chamber poll

Medical tourism yet to take off: Chamber poll 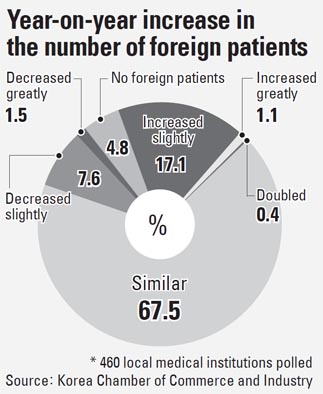 Though a year has passed since the Korean government started allowing local hospitals to market medical treatment to foreigners hoping to boost its medical tourism industry, progress has been slow, according to a survey conducted by the Korea Chamber of Commerce and Industry.

When the chamber asked 460 local medical institutions, including general hospitals and clinics, about the level of satisfaction in the policy, 93.9 percent said progress hasn’t met their expectations and only 5.7 percent said it did.

In order to attract more foreigners, a majority of the surveyed institutions said there should be improvement in marketing, tourism programs, communication in foreign languages, and level of services. Also, Korea should focus on providing specialized treatment rather than basic and promote a high-end image to differentiate itself from other medical tourism destinations such as Singapore or Thailand.

Meanwhile, the government’s policy of allowing foreign marketing created new jobs, the survey showed. One out of five hospitals recruited an average of 2.2 employees to promote medical tourism.

“Korea’s medical tourism industry is still in its infancy,” said Park Jong-nam from the chamber. “But considering Korea’s high medical standards and its price competitiveness, there is more room for the industry to grow.”

The Council for Korea Medicine Overseas Promotion, a government-sponsored institution, aims to raise the number of foreign medical tourists from 50,000 in 2009 to 140,000 in 2012.