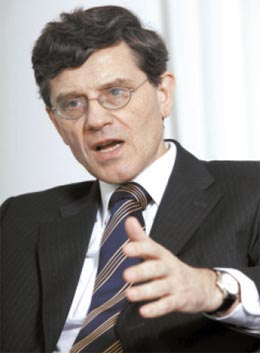 German Ambassador to Korea Hans Ulrich Seidt couldn’t believe his eyes when he saw photographs of German doctors and nurses working at a hospital in Busan in the 1950s. The photos were recently published in the JoongAng Ilbo’s monthly magazine as part of a Korean War remembrance article.

It was the first time Seidt, 58, who was appointed to his post in September of last year, had heard of the German Red Cross Hospital. The hospital was established in the southern port city on May 17, 1954, only a year after the two Koreas signed an armistice, to treat the refugees.

“The German Red Cross Hospital in Busan could be seen as the first step we took to establish a close relationship between Germany and Korea,” Seidt said. “Germany is so proud of the fact that we took part in helping Korea in the 1950s through the hard times.”

The photos were recently rediscovered by the Busan Honorary Consul when a doctor who used to work at the hospital came forward. Seidt called the rediscovery “truly significant, as 2010 not only marks the 60th anniversary of the outbreak of the Korean War but also the 20th anniversary of Germany’s reunificaiton.”

The hospital was closed on Dec. 31, 1958, after four years of treating an estimated 27,700 patients. Records show that the hospital had modern medical equipment that was not available in other parts of Korea at the time. Today, only a small memorial stone marks the area where the hospital once stood.

Looking over the photographs of the doctors treating refugees, Seidt commented, “Would those doctors and nurses have ever imagined that Korea could become a country hosting the G-20 Summit after 51 years?

The ambassador is eager to meet with the Korean medical team who used to work at the hospital and invite them as guests to the Unification Ceremony that will be held in October in Seoul. He requested that those connected with the hospital contact the German Embassy in Seoul at (02) 748-4114.