Celtics level Cavs in second round

Celtics level Cavs in second round 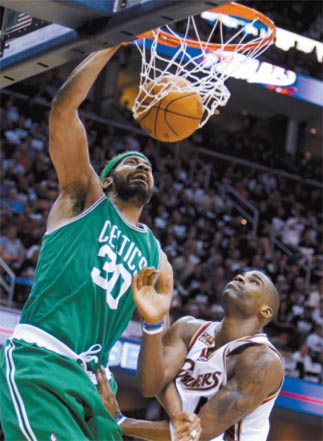 CLEVELAND - Ray Allen scored 22 points and the Boston Celtics beat Cleveland 104-86 on Monday to level their best-of-seven second round NBA Eastern Conference playoff series at one victory each.

Kevin Garnett added 18 points and 10 rebounds for Boston and Rasheed Wallace came off the bench to contribute 17 points, while Rajon Rondo matched a Celtics playoff record with 19 assists and Paul Pierce scored 14 points.

“We did everything we set out to do,” Allen said. “We’ve talked all year about closing out games. When we do that, we’re pretty good.”

The Cavaliers, 10-0 in playoff series after winning the opener as they did against the Celtics, now face games three and four on Friday and Sunday in Boston.

“Nothing is going to be given to us in this series. We’re going to have to fight for everything,” Cavaliers coach Mike Brown said. “We’ve got to decide if we’re going to take the fight to them and take these games.

“We did not fight back until late. We’ve got to fight better. Coming from behind ... that’s not good enough for me or anybody in that locker room. If we expect to win that series, we’ve gotta bring more of a sense of urgency than what we brought.

“Plain and simple, they kicked our behinds.”

One day after being named the NBA’s Most Valuable Player for the second season in a row, new concerns were raised about LeBron James’s sore elbow as the Celtics overpowered the Cavaliers, who won an NBA season-best 61 games. James led Cleveland with 24 points but hit only 7-of-15 from the field and appeared to favor the injured arm.

“I’m going to continue to try to be the player I am and not use this elbow as an excuse,” James said. “I’d never use an injury as an excuse. It’s just two games.”

But given the hunger of Cavaliers fans for their first title and Cleveland’s favored role, any diminishment of the superstar sends a shudder through the city.

“I understand the burden and the pain Cleveland fans have,” James said. “I don’t feel pressure at all. I’m looking forward to game three.”

Boston seized a 91-66 lead, the largest any team had owned at Cleveland all season, before the Cavaliers struck back with a 15-0 run, keeping the Celtics scoreless for 5:30 and trimming the deficit to 91-81.

“I don’t know that we handled it very well,” Celtics coach Doc Rivers said. “We were stuck on 91 for what felt like an hour. I kept telling our guys the clock was still moving.”

Pierce snapped the drought for the Celtics and Boston awoke from the slump to finish off the Cavaliers with an 11-3 run.

The Celtics slammed the door on a comeback before Cleveland could seize momentum ahead of game three, which is four days away but important to Boston, which swiped the home-court edge and can win three at home.

“It’s important to do the same things we did in the first three quarters and the way we closed the game out,” Rondo said.

Two seasons after Boston brought home a record 17th NBA crown, critics said the Celtics were too old and past their prime, with James leading the charge of a new generation.

“I think people said it to try and jab at us,” Allen said. “We heard it on the road and from our own media at home. But we didn’t worry about it. I saw guys come to the gym every single day getting their shots up, working on their bodies. Everybody was ready for the challenge.”

Before the game, NBA commissioner David Stern said he hopes superstar playmaker James remains with the Cavaliers despite looking at free agent deals once the season is over.

“That’s the way it should be,” Stern said. “It allows teams to keep their own players.”